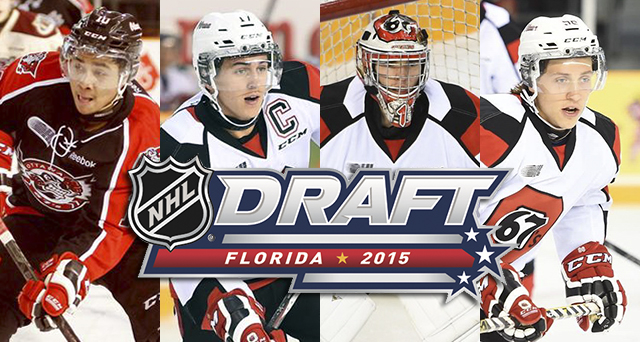 Later this week, GMs from across the NHL will walk up to the podium and decide the fates of over 200 young hockey players.

The NHL Entry Draft is set for Friday, June 26 at 7 p.m. and the Ottawa 67’s have four draft eligible players drawing their fair share of interest this season. Travis Konecny, Dante Salituro, Jeremiah Addison, and Liam Herbst should all hear their names called, as they begin their journey to the pros.

Let’s take a look at what NHL scouts are saying about them and their final draft rankings.

The 67’s captain has made a significant jump since the midterm rankings, he was listed at 26 in January and now sits 12 spots higher.

Returning from a short stint on the injury list, Konecny boosted his draft stock by having a strong post-season showing. The dynamic forward put up great numbers in the 2015 OHL playoffs, scoring 10 points in five games.

His skill and compete level are the key attributes scouts have been raving about. Konecny has been compared to players like Phil Kessel and Zach Parise. His size may be his only detractor, but what he doesn’t have in height, he more than makes up for in heart.

Konecny’s leadership has been a sought after skill as well. Not only leading the 67’s into action this season, Travis captained Team Canada U-18 to a gold medal in the 2014 Ivan Hlinka Tournament.

He also donned the “C” for Team Ontario in the 2014 World Under-17 Hockey Challenge. NHL clubs are always looking for players with more than just on-ice talent, Konecny’s strong character should set him apart.

His strong showing at the NHL Draft Combine and earning MVP honours at the BMO NHL-CHL Top Prospects Game, have earned him high praise throughout front offices around the NHL.

With the incredible depth of the 2015 NHL Entry Draft, Konecny’s stock could rise or fall on draft day depending on GM’s preferences. Though scouts have been quite consistent in their overall evaluation of him.

“He’s a highly skilled forward who never quits. He skates very well, has excellent speed, is not afraid to get involved in battles and has no fear of taking the puck to the net.” – Chris Edwards, NHL Central Scouting

“A talented scoring forward that can play either as a centre or on the wing; plays with the bite and intensity of a guy who is willing to do anything to win a game. Possesses dynamic skating ability that allows him to accelerate rapidly with each step, incredible hockey sense, electrifying puck handling skills, and a lightning release on his shot; when you put this skill set together with hard-nosed determination, pro-activeness in all three zones, and a physical willingness to grind and persevere, you get a game-changer who can be extremely difficult to play against.” – Curtis Joe, Elite Prospects

Though ranked outside of the top three rounds, Dante Salituro could be a diamond-in-the-rough find for some NHL club.

He broke out last season, scoring 37 goals and adding 41 assists, leading the 67’s in points. He was also voted the second most underrated player in the OHL’s Eastern Conference.

He’s added 19 points to his production each year since his rookie season.

Much like his captain, Dante’s stature has somewhat diminished his draft ranking. Most scouts have Salituro pegged as a high-risk-high-reward pick. If he can adjust to the NHL game, his skills and speed could make him a superstar. Some even consider him the “sleeper of all sleepers” at this years draft.

At 5’9″ and 178 lb., the 18 year-old forward has been likened to NHLers Brendan Gallagher and Tyler Johnson. Some experts have even stated that on the high end Salituro could mature into the next Johnny ‘Hockey’ Gaudreau of the NHL’s Calgary Flames.

Gaudreau was taken by the Flames only five spots ahead of Salituro’s final draft ranking, with the 104th pick, in the 2011 NHL Entry Draft.

“Superb short stocky centre who is a top skater that can make plays at top speed. Dynamic top end skater with great jump and dangle at breakneck speed. A great skater whose balance makes tough to knock him off the puck. Any loose puck has a chance of being his because he works hard to unearth them and make chances for his team. A battler who doesn’t seem to view himself as the smaller guy and it can hurt him. He is so surprisingly quick and has a very deceptive shot. His puck skills let him set up his line mates, and he makes sure he is in position in the defensive end. Works hard, and leads by example.“ – Bill Placzek, DraftSite.com

“[Salituro] has regularly shown that he can play at a high tempo and compensate for his relatively compact frame, all while possessing one of the quickest releases in the Ontario Hockey League.” – Neate Sager, Yahoo Sports

Salituro’s left winger chose the right season to take his game to the next level. Alongside the talented centre, Addison collected a career best 47 points last season. He almost triple his production from the 2013-14 OHL season. The move from Saginaw to Ottawa has had a huge impact on his career.

His gritty, hard-nosed play has had NHL scouts comparing the 67’s forward to Mike Richards and Alex Burrows.

This heavy-hitting winger will bring physicality and heart to whichever NHL club calls his name.

“Skilled wing with a strong skating style who is good one-on-one when carrying, and finds soft areas when he doesn’t have it. Good release. Good forechecker with good physicality.” – Bill Placzek, DraftSite.com

“Addison has been a steady presence… [he] has been essential for the 67’s as a penalty killer and at 5-on-5.” – Neate Sager, Yahoo Sports

Herbst has come along way since this time last year.

Herbst is definitely not a polished product, but for a NHL team looking to the future, his 6’3″, 195 lb. frame makes him a worth while pick.

“His game this season has elevated and he may very well have put himself back in the conversation for a team looking top develop a goalie.” – Bill Placzek, DraftSite.com

“He’s a big guy who puts himself in position to make the first save and who is likely only scratching the surface of his ceiling.” – OHL Prospects Blog