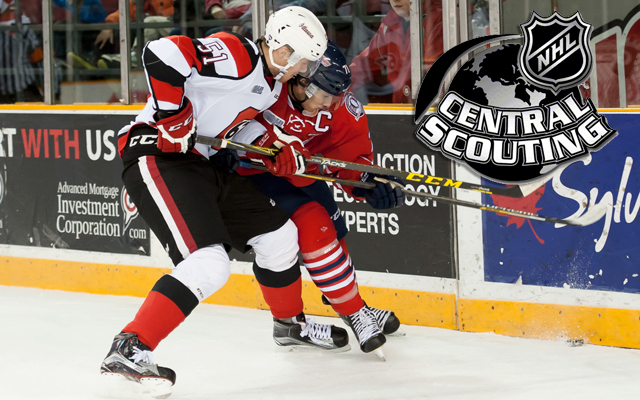 Ottawa forwards Travis Barron, Dante Salituro, and Drake Rymsha, as well as defenceman Stepan Falkovsky were among 62 OHL players that made the NHL Central Scouting’s November ‘Players to Watch’ list for the 2016 NHL Draft which takes place June 24-25 in Buffalo, New York.

“Mississauga has been able to stockpile quite a collection of prospects for both the 2016 and 2017 NHL draft class,” NHL Director of Central Scouting Dan Marr told NHL.com’s Mike Morreale. “Second-year players McLeod and Bastian continue to develop and contribute while establishing themselves as first-round considerations. Nylander is excelling on the smaller North American ice and the three of these players give Mississauga a uniqueness of having a line of first-round prospects.”

The trio of Knights in Tkachuk, Jones and Juolevi have also caught the attention of scouts.

“Tkachuk has elite hockey IQ and vision,” NHL Central Scouting’s Matt Ryan told nhl.com. “He makes the players around him better and has a very good scoring touch around the net. He plays inside the dots and is willing to go to the hard areas to score goals. He brings a physical element and is able to get under the skin of his opponents.”

Fellow Knights newcomer Max Jones is another player that has peaked the interest of NHL Central Scouting.

“Jones is a strong power forward who possesses great speed and acceleration, has a heavy shot and quick hands,” Ryan noted. “He loves to drive the net and challenge defenders physically and is a nightmare for defenders below the hash marks in the offensive zone.”

Lastly, Knights rearguard Olli Juolevi is one of three OHL defenders to receive an ‘A’ rating.

“He’s a smooth-skating defenseman with poise and composure,” Ryan said of Juolevi. “He has the ability to play in every situation.”

Elsewhere in the Western Conference, Windsor Spitfires centreman Logan Brown moved up to an ‘A’ grade after receiving a ‘B’ back in September’s listing. His combination of size and skill has Marr and company paying particular attention.

“Brown is a typical case of bigger players requiring a little more time to develop and he had a slow start which was influenced by injury and suspension,” Marr said. “But now he is on top of his game and the results are showing. He moves deceptively well for his size and he knows how to utilize that size to dominate on the play and protect the puck. Logan has such good hands and puck skills for a big forward that he’s hard to stop when he’s driving to the net.”

The Knights lead the way with nine ‘Players to Watch’ followed by the Steelheads with six players, and the Hamilton Bulldogs, Sault Ste. Marie Greyhounds and Windsor Spitfires each with five players listed.

31 OHL players were selected in the 2015 NHL Draft including seven players chosen in the first round.

NHL Central Scouting ‘Players to Watch’ for the 2016 NHL Draft:

Written with files from Mike Morreale at nhl.com.