67’s come up short against Kingston despite strong effort 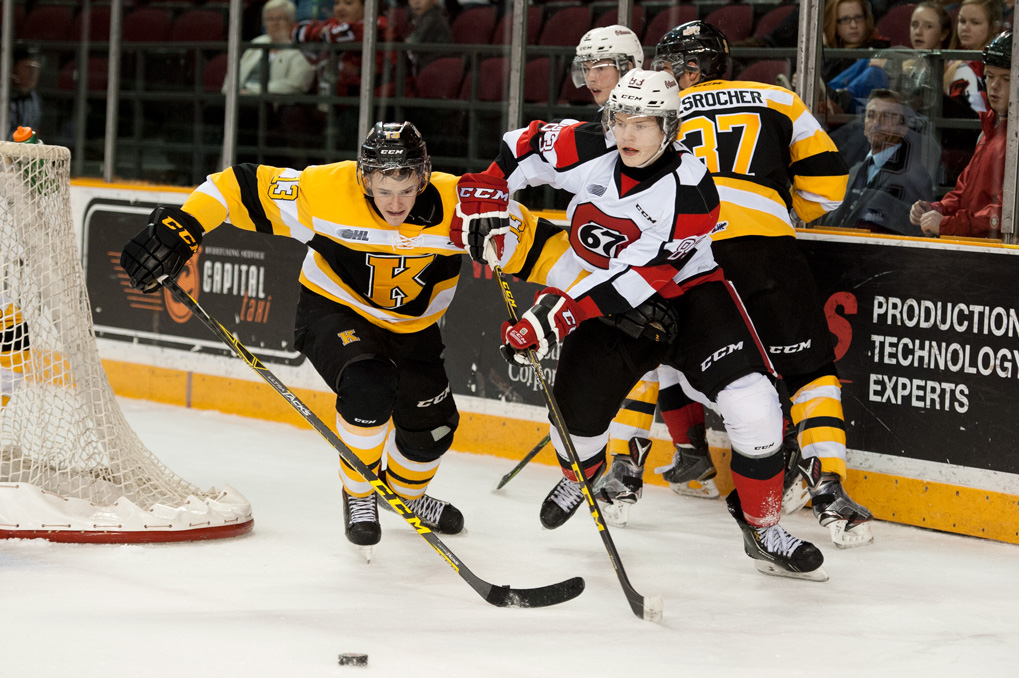 With former Ottawa 67’s star and current Detroit Red Wings goalie Petr Mrazek watching from the stands at TD Place, the Ottawa 67’s showed once again they can run with the OHL’s best, coming up just short in a 5-2 loss to the Kingston Frontenacs despite a spirited effort.

The final score is somewhat misleading — for more than 40 minutes, this was anybody’s game, with Ottawa erasing a 1-0 first-period deficit to take the lead on goals from Evan de Hann and Ben Fanjoy. Even after falling behind 3-2 late in the middle frame, the 67’s continued to press, firing 17 shots on Kingston goalie Jeremy Helvig in the third.

It was a determined effort from the 67’s against a Frontenacs roster boasting the likes of Lawson Crouse, who scored the game’s opening goal, and Juho Lammikko, who chipped in with a goal and an assist.

Spencer Watson scored what turned out to be the winner for the East-leading Frontenacs, though Kingston was outshot 30-28 by the Barber Poles on the night.

With 11 games left — five of them at home — in the regular season, the 67’s are locked in a battle for home-ice advantage in the first round of the playoffs. Following Friday night’s action, Ottawa sits sixth in the Eastern Conference but are tied in points with the Niagara IceDogs and sit only two points back of the fourth-place Peterborough Petes.

Despite the loss, head coach and general manager is confident is team will do well down the stretch with more efforts like the one he saw Friday.

“We competed with one of the best teams in the Eastern Conference. We played right with them.” he said.

The 67’s return to action at TD Place Saturday afternoon when they host the IceDogs at 1 p.m. in a game with huge playoff implications for both teams.