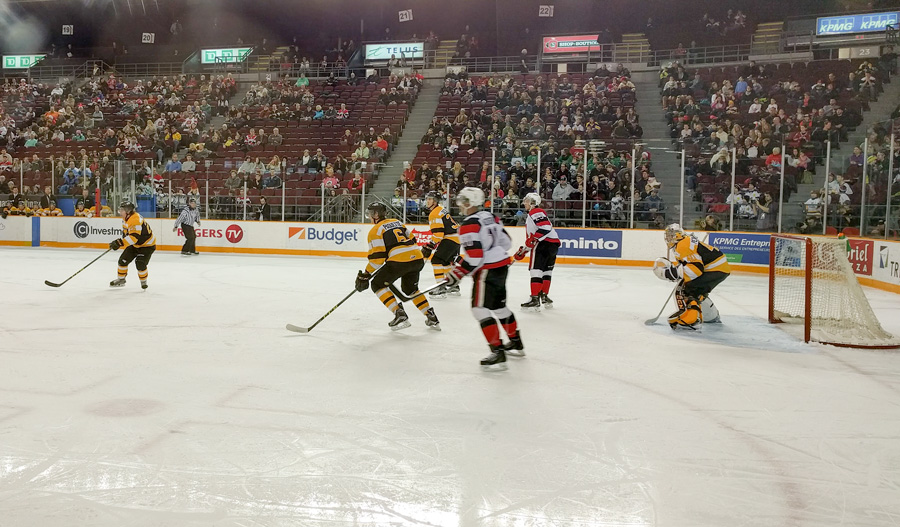 The 67’s strong first period wasn’t enough as they fell 4-2 this afternoon to their division rival Kingston Frontenacs.

Ottawa was all offence in the opening frame, dominating play and even holding the Frontenacs shotless for the first four minutes of the game. The 67’s got on the board early with a powerplay marker by Dante Salituro, his 21st of the season.

Ottawa struck again with the man advantage, as Jeremiah Addison got his 13th of the season midway through the first. Through 20 minutes the 67’s continued their commanding play, out-shooting Kingston 19-5.

The second period saw the Frontenacs push back early and score shorthanded with a goal by Cody Caron. In the last minute of the second, Kingston got on the board with a power play goal by Stephen Desrocher to tie the game 2-2 through 40 minutes of play.

The final frame saw the Fronts tally two goals and take the lead 4-2 midway through the period. Ottawa pushed back and got the extra attacker out during the last five minutes of play, but were unable to capitalize.

The Barber Poles will now take a deserved two-week holiday break and don’t return to The Arena at TD Place until Friday, January 8 at 7 p.m. for a matchup against the Fontenacs and Saturday, January 9 at 1 p.m. versus the Mississauga Steelheads.

(at the Arena at TD Place)