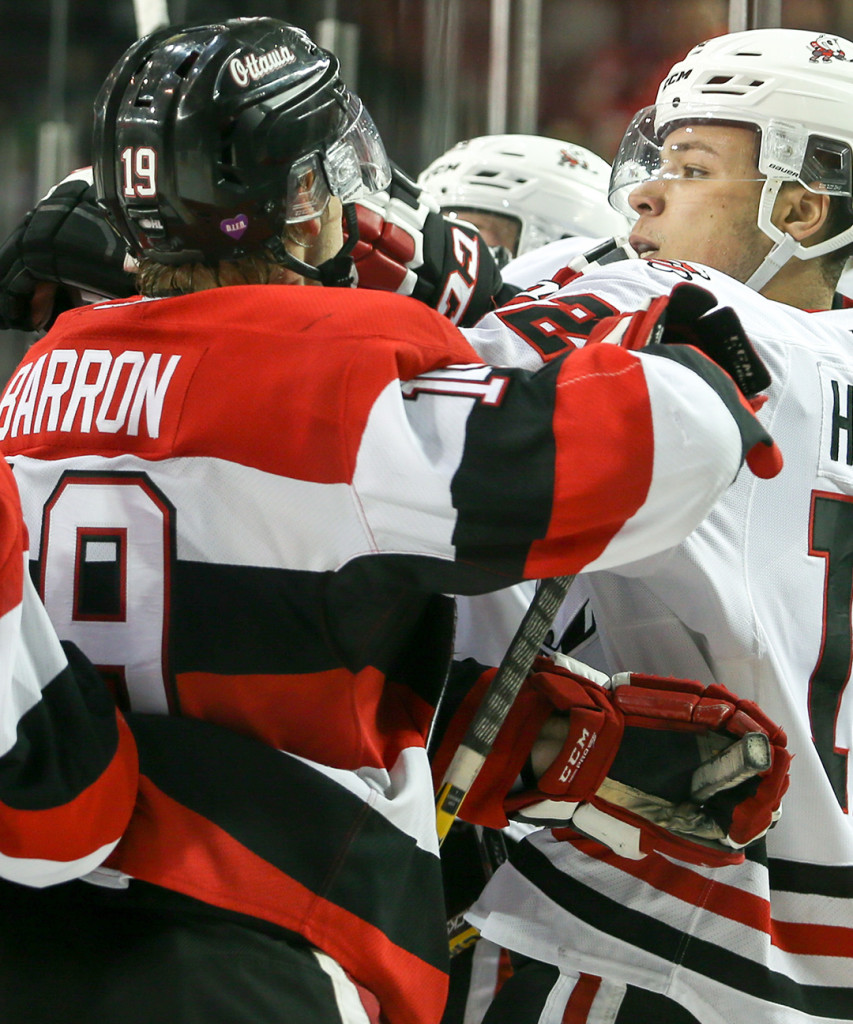 St. Catharines, ON – The Ottawa 67’s were edged 5-4 by the Niagara IceDogs in a spirited and physical opening game of the best of seven playoff series. If the series opener gives any indication what this series will be like – the fans are in for a treat!

Special teams was a key story line in Game 1 with the two teams combining for 13 penalties with Niagara netting a pair of powerplay markers while the 67’s scored three times with the man advantage against one of the OHL’s top penalty killing teams during the regular season.

It was the Niagara IceDogs that got on the scoreboard first as a fortunate bounce went in their favour on a delayed penalty as an inadvertent pass ended up in the 67’s goal. Five first period penalties by the IceDogs would prove costly as Nathan Todd netted the equalizer on the 67’s second man advantage.

Both teams turned up the tempo in the second period that saw Niagara out shoot the 67’s 20-9. Every time the IceDogs got a lead, the 67’s had an answer. Travis Barron pulled Ottawa level at 2-2 and their regular season leading scorer Dante Salituro got them even again at 3-3 on the powerplay. Niagara would regain the lead with just over five minutes remaining in the middle frame to carry a 4-3 lead into the third period.

Niagara extended their lead just over a minute into the third when Vince Dunn capitalized on the powerplay. Special teams would again help the 67’s as Jeremiah Addison scored with less than four minutes remaining to make for an intense finish at the Meridian Centre. Leo Lazarev made 31 saves on the night. The IceDogs were able to sustain the late pressure and hang on to take the opening game of the series 5-4.

Head Coach and GM Jeff Brown was proud of the effort from his team in the opening game of the series.

“I thought our guys came up with a really strong effort tonight. We gotta prove that we can play with these guys and its going to be a long series.”

Ottawa will continue their playoff run in Game 2 on Saturday in St. Catharines. The 67’s will host the IceDogs March 28 and 30 in Games 3 and 4 at The Arena at TD Place. 67’s playoff tickets for the opening round are available at Ottawa67s.com or by calling 613.599.FANS