67’s explosive start not enough in loss to Bulldogs 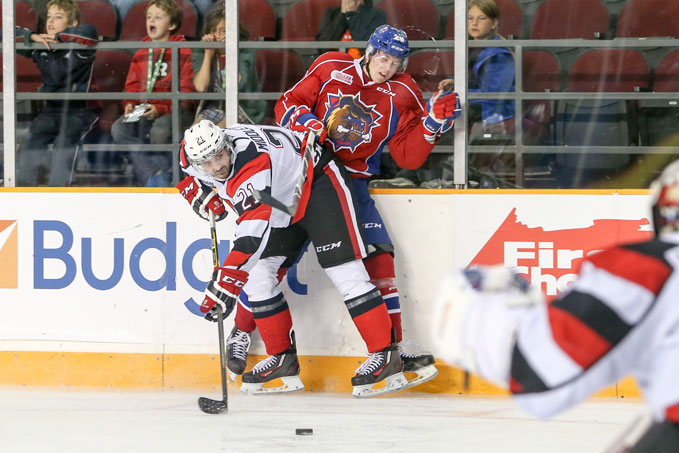 The Ottawa 67’s explosive 3-0 start wasn’t enough Friday night against Hamilton as the Bulldogs claimed a 5-3 victory on a pair of third period goals to close out the comeback.

It was an impressive start from the 67’s who were dialed in early, scoring two goals in the opening ten minutes. Jeremiah Addison buried a rebound shot to open the scoring and Artur Tyanulin delivered a great back hand pass to Ottawa native Connor Warnholtz who scored his second goal of the season. The Barber Poles held the Bulldogs to only one shot in the opening ten minutes of the game. The first period ended with the 67’s in complete control leading 2-0 and dominating the shot clock 20-6.

In the second period, the Bulldogs generated scoring chances on the powerplay but Leo Lazarev stood tall in net. The Barber Poles pushed back midway through the period where Nathan Todd delivered a pass to Nevin Guy who buried it top shelf for his fifth goal of the season beating Hamilton’s Connor Hicks.

It took over 30 minutes, but the Bulldogs finally solved Lazarev in the final half of the period. Minutes later the Bulldogs found the back of the net again and levelled the game at 3-3 with over two minutes remaining in the second period The Bulldogs scored their three second period goals in the span of 4:47.

Hamilton carried the momentum into the third period and made if four unanswered goals four minutes in to take the 4-3 lead. The Barberpoles generated momentum in the final half of the period, but couldn’t solve Connor Hicks who made 35 saves on the night. The Bulldogs made it five straight goals with an empty net marker to seal the victory by a 5-3 score.

The 67’s are back in action tomorrow night on the road against the Peterborough Petes for a 7:05 p.m. face-off. Catch Saturday night’s action LIVE on Rogers TV or on 580 CFRA.

The Ottawa 67’s return to the Arena at TD Place on Tuesday, February 9 against North Bay. Tuesday match is a rescheduled game from November 8. Those who had tickets for the November 8 game can use that same ticket to get into the game on Tuesday night’s game.