67’S FINALLY HAVE NO. 1 LINE IN KONECNY, BRADFORD AND VAN STRALEN 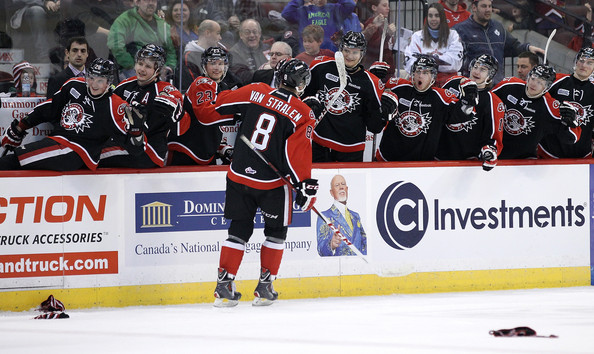 The Ottawa 67’s really haven’t had a legitimate No. 1 line since a then-17-year-old Sean Monahan was somewhat reluctantly thrown in between the league’s top goal scorer and future LA King Tyler Toffoli and soon-to-be Ottawa Senators draft Shane Prince.

By that, we mean the type of line that goes head-to-head with the other top lines around the Ontario Hockey League and usually comes out on the right end of the ledger.

And this time the line is triggered by a youngster who won’t turn 17 until next month and is still making things happen for a 19-year-old who has suddenly found a scoring touch upon arriving in Ottawa, and a 20-year-old who only wishes he had found this kind of touch around the net a year or two earlier after scoring his second career OHL hat trick.

The line of Travis Konecny, Erik Bradford and Ryan Van Stralen continued in its attempts to push the 67’s into the post-season, accounting for all the offence as the 67’s pulled the improbable and beat the Eastern Conference leaders 4-0 before a crowd of 5,732 at the Canadian Tire Centre Saturday afternoon.

The goals were more than enough to back the 33-save goaltending of Philippe Trudeau who lost his shutout with seven seconds remaining and the triumph — temporarily at least — lifted the 67’s to within two points of the 8th and final playoff spot though they hardly control their own destiny.

Nonetheless, the line of Konecny, Bradford and Van Stralen is fun to watch because since being thrown together back on Jan. 9, the unlikely trio has a combined 22 goals and 52 points in 11 games, during which the 67’s are 4-7.

It’s unlikely only that few expected Konecny to be better than a point-a-game in his rookie season, Van Stralen hadn’t shown first line offensive capabilities until the last month, and well, no one knew Bradford had this kind of offensive skill.

With a crowd full of youngsters in their minor hockey jerseys, Konecny put on a show with half a dozen highlight-reel-worth moves, both in making veteran defencemen look silly and passes between the legs without even looking.

And his end-to-end rush on the 67’s first goals was one to remember.

Konecny picked up the puck deep in the 67’s end, made a beeline up the right wing and did a toe-drag that almost put the Generals defenceman face-first into his own bench, before unloading a shot to the glove hand of Generals starter Ken Apply, who got a piece of it, only to have the rebound come right to Bradford, who buried it.

The goal was Bradford’s eighth in 11 games since becoming a 67 the first week on January in a trade for Joseph Blandisi and the Barrie Colts.

Van Stralen, meanwhile, scored a pair in the second period and another into an empty net, giving him 26 on the season, three more than he had in his first two seasons as a 67 combined.

He also has nine goals and 16 points in those 11 games playing with Konecny and Bradford.

Konecny’s two assists have the league’s surefire rookie of the year with five goals and 17 points in those 11, as he continues to be the only rookie in the league leading his team in scoring.

He’s also surpassed Monahan’s 47 points as a rookie and is only three goals off Monahan’s first year total of 20.

And Bradford, well he’s been even more proficient offensively, the goal and assist giving him eight goals and 19 points his arrival.

Stephen Desrocher had the only Oshawa goal.

The 67’s are back home Tuesday night to the Peterborough Petes.