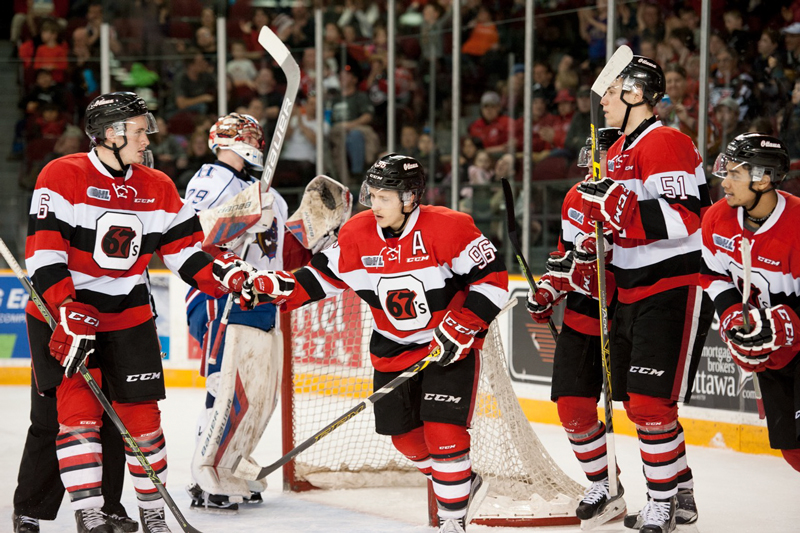 In front of over 6,500 on Fan Appreciation night at the Arena at TD Place the 67’s showed their thanks earning their fifth straight win and two big points in the Eastern Conference playoff race for home ice advantage.

Artur Tyanulin had 2 goals and Liam Herbst stopped 32 of 35 shots he faced in the 5-3 win over Hamilton that eliminated the Bulldogs from playoff contention. The victory puts the Barber Poles just 1 point behind Niagara for 4th place and home ice advantage in the opening round of the playoffs.

Fighting for their playoff lives, the Bulldogs took a 1-0 lead in the first period. Captain Jake Middleton pulled the 67’s even with just over three minutes remaining in the opening frame.

Artur Tyanulin and Liam Herbst were the story in the 2nd period. Tyanulin notched a pair and now has eight goals in his last five games while Herbst stopped all of the 16 shots he faced. Dante Salituro’s 38th goal of the season sent Ottawa into the final period with a 4-1 lead.

The Bulldogs pulled a goal back early in the third, but Trent Mallette restored the three goal lead with just over two minutes remaining. Hamilton would add a third late, but saw their playoff hopes dashed in the 5-3 defeat to Ottawa.

67’s assistant coach Mike Eastwood, who was assumed the head coaching duties tonight with head coach and GM Jeff Brown out of town at the OHL Cup, was impressed with the performance, praising the line of Tyanulin, Todd and Barron.

“For the majority of the game we played really well,” said Eastwood. “Tyanulin is having a lot of success and Todd and Barron have been a big factor in his success. Our focus now is Oshawa and a chance to move up in the standings.”

The 67’s will continue their battle to claim home ice advantage in the first round of the OHL playoffs when they close out the regular season schedule Sunday evening  in Oshawa when they take on the Generals at 6:05 p.m at General Motors Centre