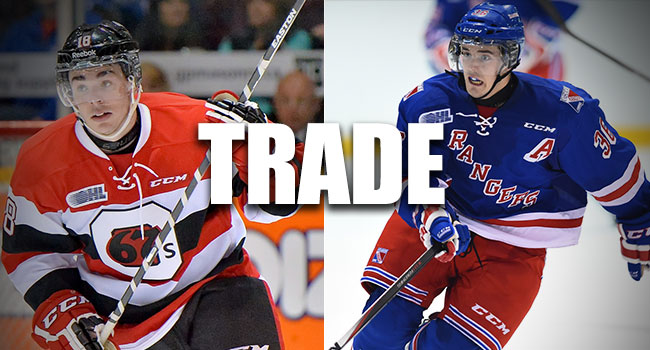 OTTAWA – The Ottawa 67’s made two more trades on Thursday, the deadline for transactions involving overage (20-year-old) players in the Ontario Hockey League.

The team acquired overage centre and Orléans native Curtis Meighan (MEE-an) from the Kitchener Rangers in exchange for an eighth-round pick in the 2017 OHL Priority Selection.

Meighan scored twice and had 14 assists in 36 games this season, his fourth with the Rangers. He had 11 goals and 37 points with Kitchener last year in 68 games.

He will be in the line-up for the 67’s on Thursday night in Peterborough against the Petes.

“Curtis is a solid contributor, a local kid who will excel for us down the stretch as he gets a chance to complete his junior career at home,” said Pat Higgins, 67’s general manager.

Bradford had 12 goals and 35 points for the 67’s this season. Acquired at the trade deadline last year from the Barrie Colts, he scored 15 goals and 42 points in 27 games before suffering a broken leg that ended his season.

After Thursday’s game in Peterborough, the 67’s return to Ottawa and will host the Windsor Spitfires at TD Place on Friday evening. Face-off is at 7:30 p.m.