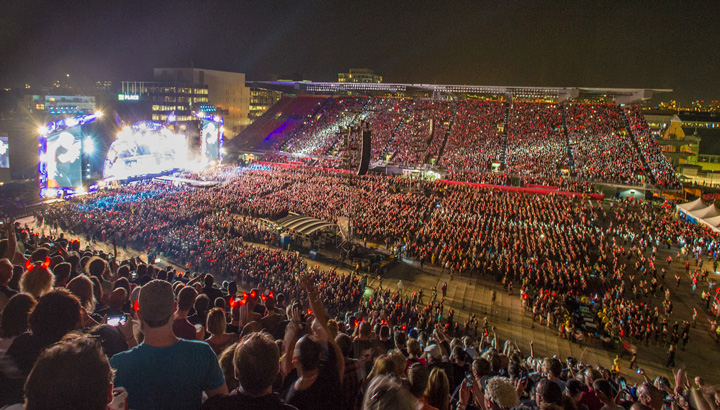 On Thursday, September 3, AC/DC christened the stadium at TD Place with the fifth largest concert in Ottawa history.

Over 100 hours were spent setting up for the quintessential rock show, as TD Place was transformed in an epic concert venue.

Fans got ready too, showing their love for these Aussie rockers.

Can’t go to an @ACDC concert and not buy the horns! #RockorBustWorldTour #Ottawa @TD_Place pic.twitter.com/4TlIZHl3g9

The atmosphere at TD Place is always electrifying, but when AC/DC rocks the stadium you know HIGH VOLTAGE is in the air.

Vintage Trouble opened for #ACDC tonight & we caught up with them just before the show! #YOW #TDPlace pic.twitter.com/T4pnCHHXwb

Nearly 30,000 fans were treated to all the beloved classics and a few of the newest hits from these multi-generational artists.

Even a couple TD Place regulars were in attendance.

And a few (thousand), not in attendance, enjoyed rocking out from afar.

After an amazing night at TD Place, everyone could not stop talking about it!

What a great way to cap off an amazing summer at TD Place! Check some great photos from last night’s show here.

Next up is Alabama Shakes in the more intimate Arena at TD Place on Thursday, September 26. To stay in the know about all the exciting, upcoming events follow TD Place on Twitter!