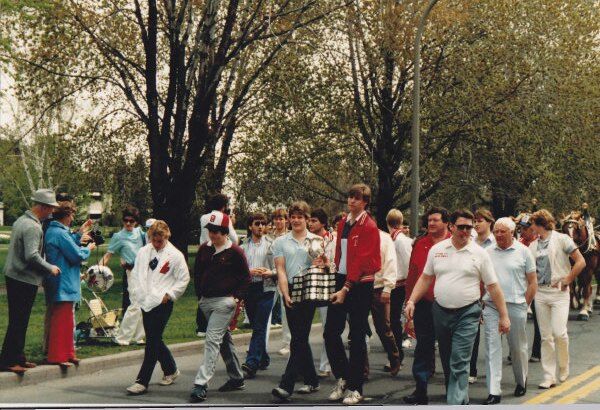 The Ottawa 67’s entered their second era as defending league champs and hot off the heels of a Memorial Cup appearance. In the first season of that second decade, the team picked up right where they had left off, finishing first overall in league standings at the end of the regular season.

That year Bobby Smith captured the league scoring title by beating out a name you may recognize… Wayne Gretzky. Gretzky finished the season with 182 points! Bobby? He finished with 192 points in three less games than Wayne.

After the 1977-78 season concluded (a loss in the semifinals), Bobby Smith was drafted 1st overall in the NHL Amateur Draft and went on to have a successful career with the Minnesota North Stars and Montreal Canadiens. Before hanging them up, Bobby played in over 1000 games, scoring over 1000 points, and winning the Stanley Cup with the Habs in 1986.

The early 80s continued to be successful years for Barber Poles players. Between 1980 and 1982, 21 67’s players were drafted into the NHL, with a team record nine players chosen in 1982.

That year was also fruitful for the team on the ice. They claimed a divisional title and competed for the J. Ross Robertson Cup for the first time since they had one it in 1977. The Kitchener Rangers unfortunately swept the 67’s, though fans would have to wait long for another league championship and another shot at the Memorial Cup.

They claimed the division title for the third consecutive year and entered the playoffs extremely determined. The Barber Poles dominated the playoffs that year, losing just one game en route to claiming the team’s second J. Ross Robertson Trophy.

As league champions, the 67’s traveled down to Kitchener to represent the OHL at the Memorial Cup. The 67’s opened the tournament winning its first two games over Laval (QMJHL), featuring Mario Lemieux, and Kamloops (WHL). When Ottawa faced the host Kitchener Rangers in their third game of the round robin, the team was bounced seven goals to two. With this victory, Kitchener received a bye to the finals.

In the semi-finals, the Barber Poles squared off against Kamloops and beat the Blazers 7-2. After this victory, the 67’s were set to have a rematch against the host Rangers, who only days earlier had defeated them convincingly.

In that final game, the score ended the same 7-2. Only this time, the Barber Poles found themselves on the right side. The 67’s had trounced the Rangers on home ice and claimed its first Memorial Cup in franchise history. 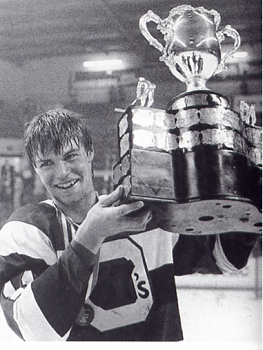 Adam Creighton was awarded the Stafford Smythe Memorial Trophy as tournament MVP and Darren Pang, the Hap Emms Memorial Trophy for Most Outstanding Goaltender. Additionally, of the six players named to the tournament All-Star lineup, four of them, had red, black and white stripes on their jerseys.

After guiding the 67’s to a Memorial Cup Championship, Brian Kilrea was offered a job in the NHL. He became the assistant coach for the defending Stanley Cup Champions at the time, the New York Islanders.

In the years following Kilrea’s departure, the Barber Poles struggled, finishing third last in the entire league in 1984-85 and last in their division and second last in the league during the 1985-86 season.

Following a two-year stint with the Islanders in the NHL, to the delight of many, Brian Kilrea returned to the 67’s bench. The team bounced back right away, finishing third in their division and won a playoff series, a drastic improvement over the last two seasons.

The end of this season concluded the second era, one that will always be remembered as a championship decade.

1984 Memorial Cup Champions in the NHL

On October 20, the 67’s pay tribute to this decade of dominance by dedicating their game to this era. Get your tickets now, you don’t to miss your opportunity to see 67’s legends (including Bobby Smith himself) on the ice at the Arena at TD Place as we pay tribute to our alumni in celebration of our 50th Anniversary.