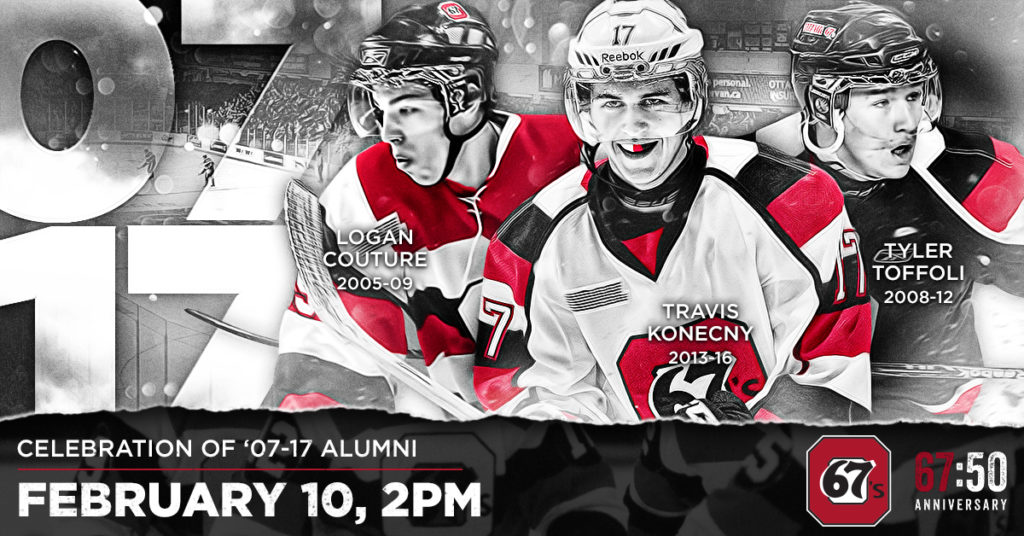 The Ottawa 67’s started their fifth decade as they ended the previous one, by losing in the first round of the playoffs. The team featured two future NHLers in Jamie McGinn and Logan Couture. They both played 51 games and were tied for the team lead in points with 58. Though despite their success, the Barber Poles finished sixth in their conference and were swept in the first round by an Oshawa Generals club that featured future NHL first overall pick and junior hockey phenom John Tavares.

Ottawa bounced back the following season led by leading scorer Logan Couture, who was accompanied by rookie sensation Tyler Toffoli. The team finished second in the division and third in the Eastern Conference and were set to take on sixth seeded Niagara. The series was a hard fought seven games and came down to overtime on home ice. The Dogs would score in overtime and upset the 67’s in the first round.

In a bittersweet moment, the next season the 67’s lost star forward Logan Couture to the professional ranks. Despite that, Tyler Toffoli broke out scoring 33 more points than the season prior and establishing himself as a premier goal scorer in the league with 37 as a 17 year-old. The team improved that year finishing second in the Eastern Conference and first in their division. With an eye on the future, they acquired sophomore Shane Prince from the Kitchener Rangers for a third round pick, as well as added rookies Cody Ceci, Petr Mrazek, and Tyler Graovac to lineup. 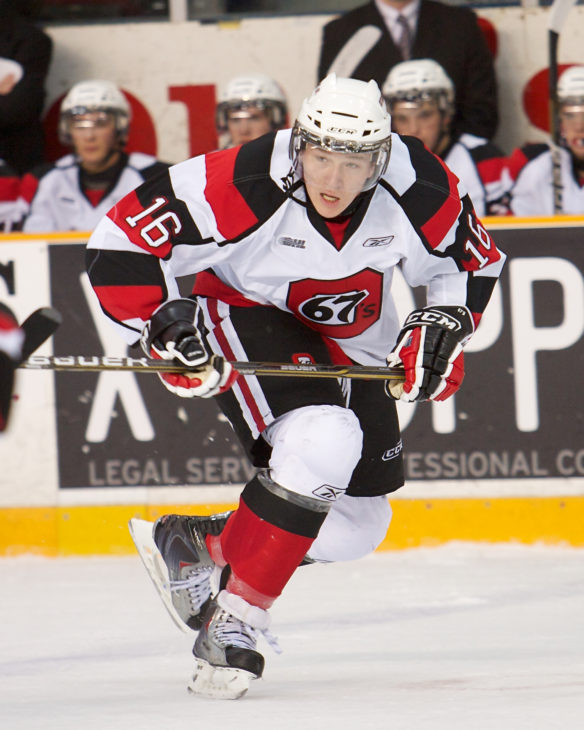 They were set to take on the Niagara Ice Dogs in the first round once again. With memories of the year prior in the back of their heads the Barber Poles made quick work and ended the series in five games. Following the series, the boys were matched up against the Mississauga St. Michael’s Majors in the second round. The Majors roster included future NHLers Devante Smith-Pelley and Casey Cizikas, and the team was co-coached by current 67’s general manager James Boyd. The 67’s dropped another hard fought series in seven games, losing the final two to the Majors.

Despite the loss, the 67’s were building for the future and they knew they had a young talented team. Though at the time, people did not know just how talented. The team featured four future NHL players, including Toffoli and Mrazek who were drafted in the second and fifth rounds of the NHL Entry Draft that offseason. The team also picked up a fifth future NHL player in the OHL Priority Selection by drafting Sean Monahan 16th overall.

Ottawa continued to improve, they once again finished second in the conference however, they did so finishing with 11 more points than the season prior. Tyler Toffoli broke both the 50 goal mark and the 100 point mark with Prince following two points behind with 98 on the year. Rookie Sean Monahan also had an impressive rookie year putting up 20 goals and finishing with 47 points.

The young 67’s would enter the playoffs against the seventh seeded Sudbury Wolves. The series was quick, ending in only four games. Unfortunately, the victor of the series was not the expected one, as the Wolves upset the 67’s. The following offseason both Ceci and Graovac were selected in the NHL Entry Draft.

Despite another heartbreaking loss the 67’s continued to dominate their division in the regular season. The team claimed the top spot by more than 15 points and finished second in the conference. Come playoffs the boys were set to face an old rival, the Belleville Bulls. The series went six games with the 67’s moving on to face third seeded Barrie, who featured Mark Scheifele and a rookie Aaron Ekblad on the backend. Another hard fought series for the Barber Poles that went the distance. Game 7, overtime, in front of a packed home crowd the 67’s would score to win the series and advance to the conference finals to take on the Niagara Ice Dogs. 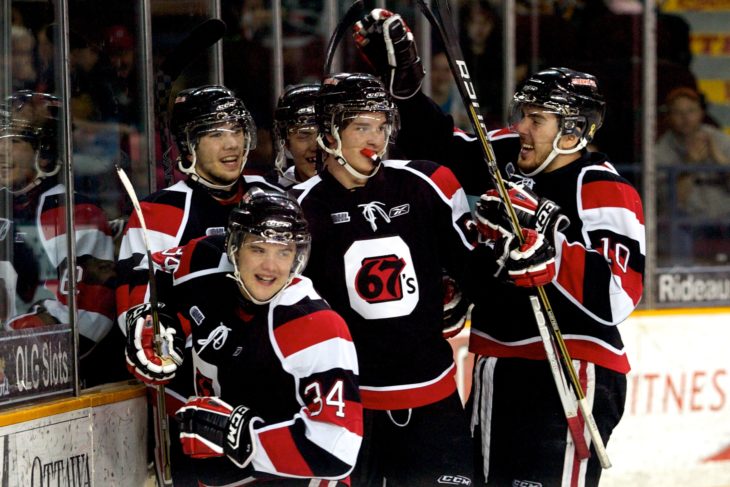 The 2012 Eastern Conference finals was the first time the Barber Poles had appeared this late in the playoffs since 2005. The first game was a tight 2-1 overtime loss for the 67’s on the road. The boys bounced back showcasing their offensive firepower with a 7-4 win. The team then dropped a pair of 5-2 losses at home and then lost a close 3-2 game back in Niagara to ultimately lose the series. Unbeknownst to fans this would be the last time they would see the 67’s outside of the first round of the playoffs.

The following few seasons were tough for the 67’s. During the offseason after their run to the conference finals they would lose many key guys to the professional ranks. In addition the team would be required to uproot and move down the road to the Canadian Tire Centre while renovations were performed on TD Place as part of the arrival of the Ottawa REDBLACKS of the CFL and the Ottawa Fury FC of the NASL (Fury FC have since moved to the USL) to the site. The only future NHLer on the team was Sean Monahan. Joseph Blandisi would be acquired part way through the year, but despite that the Barber Poles would finish in the bottom of their division and miss the playoffs.

As a result, the 67’s would be awarded the first overall pick and would use to select Travis Konecny. The addition of the young future star was welcomed, however the 67’s lost Monahan to the pro ranks and traded Blandisi to the Colts during the season. The team would finish bottom of their division and miss the playoffs once again. 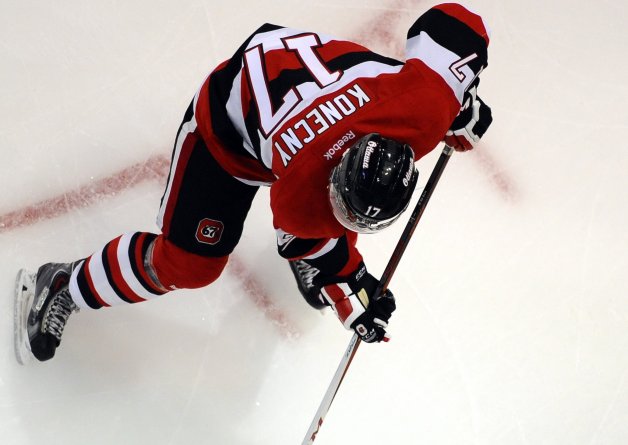 For the 2014-2015 regular season, the 67’s were welcomed back to a newly renovated TD Place. They would also be awarded the third overall pick during the offseason and would use it to acquire current team captain Travis Barron third overall. Back at their true home, the 67’s were rejuvenated and climbed out of the bottom spot in the Eastern Conference for the first time in two seasons to finish second in their division and fourth in the conference.

The boys were set to face a familiar foe in the first round, once again taking on the Niagara Ice Dogs. The Ice Dogs had future NHLers Josh Ho-Sang and Brendan Perlini in the lineup. Ottawa came out big scoring eight goals in each of their first two games to take a nearly 2-0 series lead. The Ice Dogs would battle back and win the next four straight eliminating the 67’s from the playoffs.

2015-2016 the Ottawa 67’s made one of the largest trades in franchise history sending star forward Travis Konecny and forward Sam Studnicka to Sarnia in return for current 67’s assistant captain and team leader in points and goals Sasha Chmelevski, forward Chase Campbell and eight draft picks. This season the 67’s were backstopped by fan favourite goaltender Leo Lazarev and Artur Tyanulin emerged as a solid junior player with his first 50+ point season. 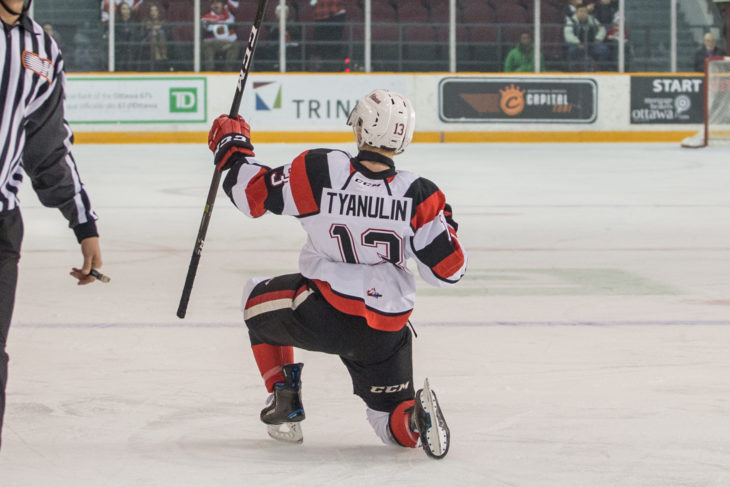 The team would finish middle of the pack once again and lineup to face none other than the Niagara Ice Dogs. Despite the team’s best efforts they would drop this series to Niagara 4-1 and would once again be eliminated from the first round of the playoffs.

2016-2017 was the final year of the fifth decade for the 67’s. Artur Tyanulin had a career year scoring at a 1.27 points/game average with 85 points in 67 games. The team struggled somewhat finishing last in their division, but were able to sneak into the seventh seed of the playoffs by finishing ahead of three teams in the central division. As a result the boys were matched up with a second seeded Mississauga team that boasted 2016 first rounder Michael McLeod, and future top round picks in the 2017 NHL draft Nicolas Hague and Owen Tippet. Tippet had established himself as a goal scorer as well with 44 on the year. This group of Steelheads also featured future 67’s Jacob Cascagnette and Shaw Boomhower.

The 67’s were down 3-0 in the series, but refused to quit. The boys battled back to make it 3-2 before dropping Game 6 at home which resulted in a third straight first round exit.

The fifth decade of the 67’s may not have featured the triumphs of decades past, but the team had some very talented players through the 10 years including multiple NHL stars of today. Although three straight first round exits to close out is not ideal, the team is once again young and talented and closed the decade with multiple NHL drafted players on the roster and multiple expected to be drafted in the following year’s draft.

This team’s story has yet to be told but you can come and be a part of history and the 50th anniversary celebration and join us for a game at TD Place. Click here your tickets now!