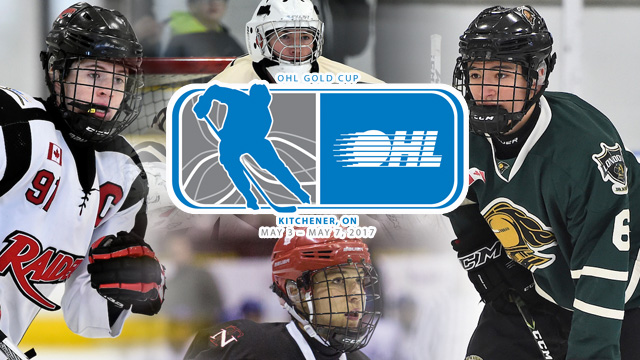 The Ottawa 67’s will be well-represented when the 2017 OHL Gold Cup kicks off in Kitchener in May.

The rosters for the tournament, which runs May 3-7, were released Tuesday and feature five 67’s prospects, including this year’s first round pick in the OHL Priority Selection Draft, Graeme Clarke. Clarke will play on the GTHL Red team, while fellow 67’s prospects Bruce Coltart (HEO), Jacob DiDanieli (OMHA White), Lucas Peric (OMHA White) and Jack Quinn (HEO), will also suit up for the eight-team tournament.

In all, 160 players were selected to take part, including 19 of the 21 first-round picks in this year’s OHL draft.

“Every year, the players selected to participate in the OHL Gold Cup put on such a display of skill and the ability to adapt to a new team, it’s so fun to see,” said OHL Gold Cup Co-Chair, Tony Martindale.

The OHL Gold Cup is an annual showcase event featuring top under-16 talent in Ontario. As part of the Hockey Canada Program of Excellence, select players from the OHL Gold Cup will be invited to attend the National Under-17 Selection Camp, where they will have a chance to compete with other top talent from across Canada, to earn a spot at the World Under-17 Hockey Challenge.