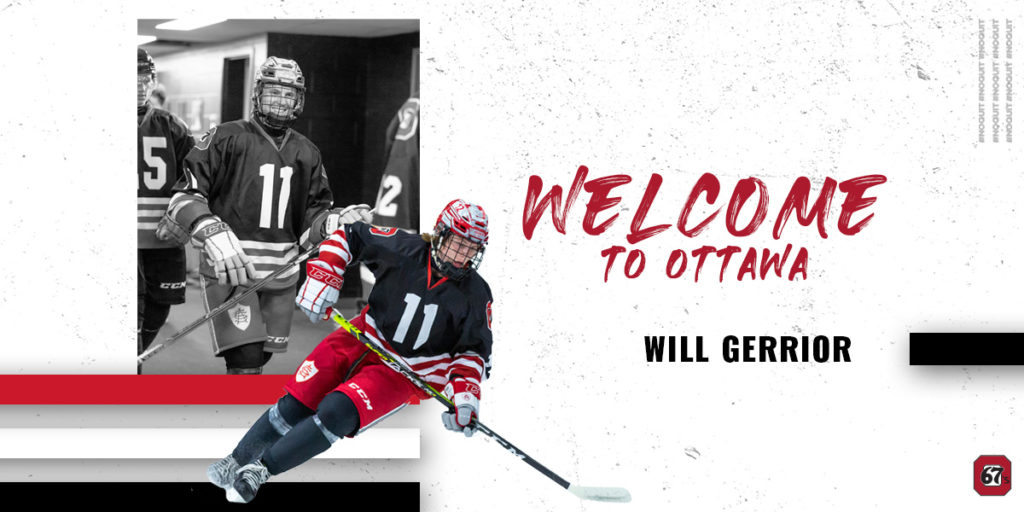 The Ottawa 67’s continued to add in the forward department, today, announcing the commitment of left wing Will Gerrior to the team.

“A former top offensive performer in the HEO with The Ottawa Junior Senators organization, Will has made productive use of the last year to add strength, which complements his high level of skill and hockey sense,” said general manager James Boyd, “We are excited to welcome Will to the Ottawa 67’s to continue his development.”

Originally hailing from Halifax, Nova Scotia, Gerrior was drafted by the Barber Poles in the ninth round of the 2020 OHL Priority Selection, 180th overall. The 17 year-old is a local product, having starred for the Junior Senators. During the 2019-20 campaign, Gerrior finished second on the team in points, racking up 29 goals and 15 assists for 44 points in 45 games. He was equally dominant in that year’s postseason, with five goals in three playoff games.

Gerrior laced up with Team Black, and later 67’s Red during the Barber Poles’ training camp intrasquad games, making a name for himself with his high level of skill. He joins a talented group of left wingers, alongside the likes of Calgary Flames prospect Jack Beck, and Dylan Robinson.

As they continue to round out their squad, the 67’s visit Peterborough on Monday, to take on the Petes for their first bit of preseason action, and first game since the onset of the COVID-19 pandemic. Puckdrop for this exciting Labour Day contest is set for 2pm EDT, and 67’s fans can listen live on Ottawa radio TSN 1200, while also following the 67’s social media channels for live updates.