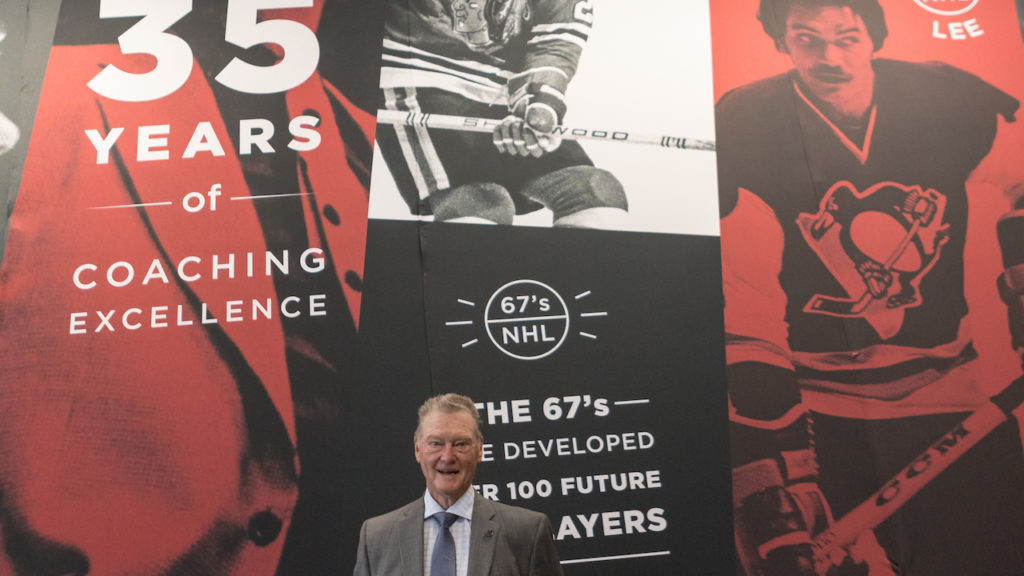 As the final horn went in the final game of the season for the Ottawa 67’s Hockey Club, it marked the ending of the 50th anniversary season. For some players it was their last game and for others, the start of a new generation.

Players and staff come and go but what remains the same is the people that believe, it’s the fans of the 67’s. We take a look back and celebrate what has made this franchise ours, but more importantly we look forward to what’s next.

So as the players take off their equipment for the last time this season, we see new opportunities. When one door closes, another opens; and in this case, it’s the beginning of the future.

The past 50 years have brought blood, sweat and tears to the Nation’s Capital. Including this past season, there’s been no shortage of emotions or milestones shared on-and-off the ice. As a franchise, the 67’s strive towards greatness year in and year out. By remembering the past and encouraging the future, Ottawa will continue to be home to one of the most respected junior franchises in Canada.

The Ottawa 67’s franchise carries a reputation that goes from generation to generation. The parties involved in this process made the hockey team a family before anything else. The past and present players, coaches and staff, but most importantly, members of the community, have given the city opportunities to succeed.

The past, present and future of 67’s hockey skates on the ice, sits in the stands and swings from the rafters. From past-greats like Denis Potvin, Brian Kilrea, Brian Campbell, Logan Couture, Tyler Toffoli, Sean Monahan to all of the present-studs on the current roster, there’s never knowing who’s next. The next 67’s alumni could be the kid attending his first-ever junior game or a player from a minor hockey league in Ottawa, but as we reflect back on 50 years – we look forward 10, 20, 30 years more.

While reflecting on the past of the Barber Poles, it’s impossible not to remember the man who brought culture to Ottawa, Brian “Killer” Kilrea. Spending 35 seasons with the Ottawa 67’s franchise from 1974 to 2009, the winningest coach in junior hockey history, is forever-treasured in the city. Kilrea helped bring championships to the franchise, winning the J. Ross Robertson Cup (1977, 1984, 2001) and the Memorial Cup (1984, 1999).

From legendary coaches to NHL-caliber players, Ottawa has had its fair share. Some of the most notable alumni have had the honour to hoist their numbers in the rafters and for others, their time could be soon. If you look up among the championship and winning-season banners, you’ll see the numbers of 67’s greats Denis Potvin (#7), Doug Wilson (#7), Peter Lee (#14), Bobby Smith (#15) and most recently, Brian Campbell (#44), who was honoured during the 50th anniversary season. There’s no knowing who’s next to join them but there’s bound to be a few players one might think of when pondering the question of who it may be.

The structure of a team may stem from the players and coaches, but what gives a franchise undisputed respect is their role within the community. For the 50th anniversary the Ottawa 67’s club and Ottawa Sports & Entertainment Group engaged in 50 acts of kindness to give back to the community that have made rostering and operating a junior hockey team so easy.

For the 50th anniversary the presence of community was strong. The people that make the 67’s who they are – will always be one of the main focal points of the franchise. From programs like Team Up!, Elementary School Gym, Hardest Working Player, 67’s GOALS! School Program, 67’s Read to Succeed Program, Voyago Puck Delivery Kids, Canadian Tire Be A Star Program and 67’s Stop Program, the Ottawa 67’s made it a priority to provide youth and the community, the opportunity to be their best self. By partnering with several businesses, local schools and community groups, the 67’s were able to round up what has been the most important thing these past 50 years – the future.

So as 50 is in the rear-view mirror and 51 is quickly approaching, we acknowledge what has defined us. We’ve learned from the past and we make the most out of the present, but most importantly, we prepare for what’s next as we look onwards to a bright, community-driven future. Here’s to 50 more.