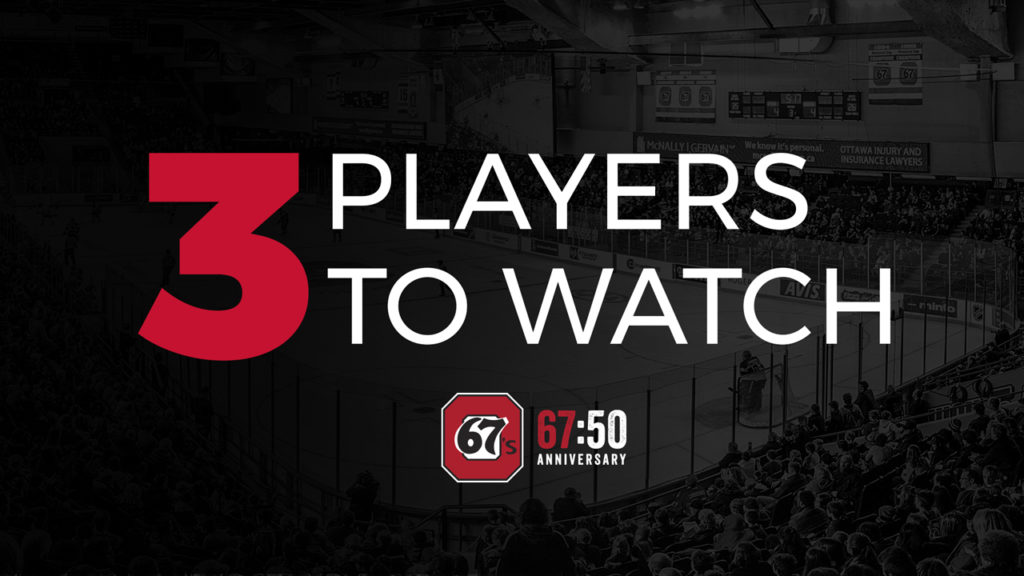 The Ottawa 67’s return to the Arena at TD Place for kickoff the second half of their season this Friday. The Generals are a familiar foe for the Barber Poles as they have already met five times this season with the 67’s with the advantage in wins with three. As the teams gear up to face off of for the first of three match-ups in the second half of the season, here’s who you need to keep an eye on.

The Ottawa 67’s leading scorer has 30 points in 34 games which are equally split between goals and assists with 15 apiece. The sixth round selection by the San Jose Sharks in last year’s NHL Entry Draft has played his best hockey this season against the Generals. In the five games the Barber Poles have played against Oshawa this season Sasha has registered 9 points (five goals, four assists). Make sure you keep an eye on Sasha as he plays against his favourite opposition as he looks to turn it up a notch for the second half.

The 67’s defenceman has been having an impressive year since the end of last season and the scouts are noticing. Since the conclusion of last year Bahl has won Gold with Team Canada at the Ivan Hlinka Memorial tournament, scored an insurance goal during game for of the Canada/Russia series for Team OHL and recently has been named to the Sherwin-William CHL/NHL Top Prospects game in January. Bahl, standing at 6’6” has been known primarily as a shutdown defender but this season has been working on developing other aspects of his game. Bahl has nearly tripled his point total from last year only halfway through the 2017-18 season. Bahl is certainly a player watch Friday night and going forward as he was recently rated a B level prospect by NHL Central Scouting and is projected to be a second round pick in the upcoming NHL Entry Draft.

The Oshawa Generals captain is a player you need to keep an eye on during Friday night’s game. The Boston Bruins second round pick, 53rd overall impressed enough with his time with the Bruins to be signed to an entry level contract with the club. The Bruins however, sent Studnicka down prior to the beginning of the season to continue to develop in the junior level. Studnicka currently leads the Generals in both assists (23) and points (33) and is near a point per game average.