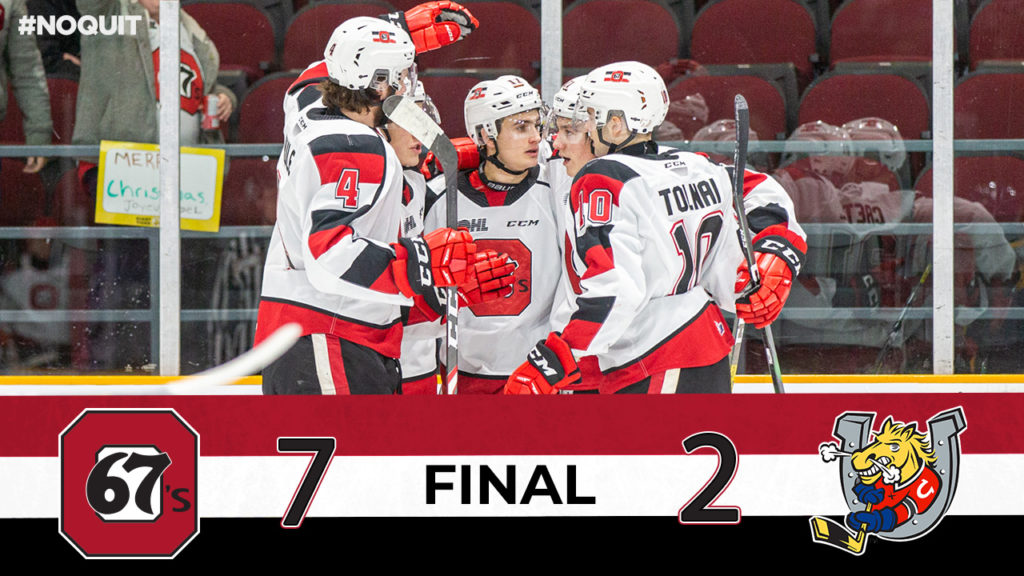 The Ottawa 67’s made it ten in a row with a big win over the Barrie Colts, with a score of 7-2. Jack Quinn scored twice for his 17th and 18th goal of the season, while Ottawa’s other goals were added by Yanic Crete (7th), Joseph Garreffa (17th), Mitchell Hoelscher (18th), Austen Keating (16th), and Marco Rossi (18th).

It was the visitors who opened the score this afternoon with a goal from Colts captain Jason Willms during a 5 on 3 power play. The 67’s managed to take a 2-1 lead at the end of the first, thanks to Crete and Garreffa’s goals, but the Colts tied the game with 2:30 to play in the first period. Shots on goal after 20 minutes of play were 17 to 11 for the Barber Poles.

The 67’s came out strong in the second period and never looked back. Mitchell Hoelscher started the festivities with a goal at 12:06 in the second and gave momentum to his teammates. Ottawa was able to put two more in the back of the net to secure their lead, while playing physical hockey. After 40 minutes of play, the Barber Poles headed to the locker room with a three-goal lead.

The Barber Poles finished the game on a high note, adding two incredible goals in the third. Marco Rossi scored his 18th of the season with an amazing individual effort in front of the net, while Jack Quinn scored his second of the game at the 7th minute of play in the third period. Ottawa’s goaltender, Cedrick Andree, made 25 saves in this afternoon’s win.

Ottawa has won its last ten games in a row, which is 4 victories short of the club’s all-time winning streak record of 14 straight set in the 1971-72 season and matched in 1998-99. The team also went 14-0 in last season’s playoffs before falling to Guelph in the OHL finals.

POST GAME COMMENTS
Associate Coach Mario Duhamel
“In the last couple of games we weren’t really sharp in the first period, we have to make sure that we stay on top of it mentally and physically. We have to concentrate and be able to stay in the moment. However, I think that in the second period we were the best team out there, special teams did a great jobs and our power-play got some big goals.”
“TJ, Felix and Yanic, who got the first goal of the game, played a really good game for us and gave us the energy and momentum.”

• Marco Rossi and Joseph Garreffa are on a 12-game point streak.
• The 67’s power-play unit was on fire tonight, scoring three goals and creating multiple chances on goal.
• The Barber Poles outshot the visitors significantly with 40 shots against 27.
• The three Stars of the game were: *** Yanic Crete (1pts), **Marco Rossi (3pts), *Austen Keating (2pts)