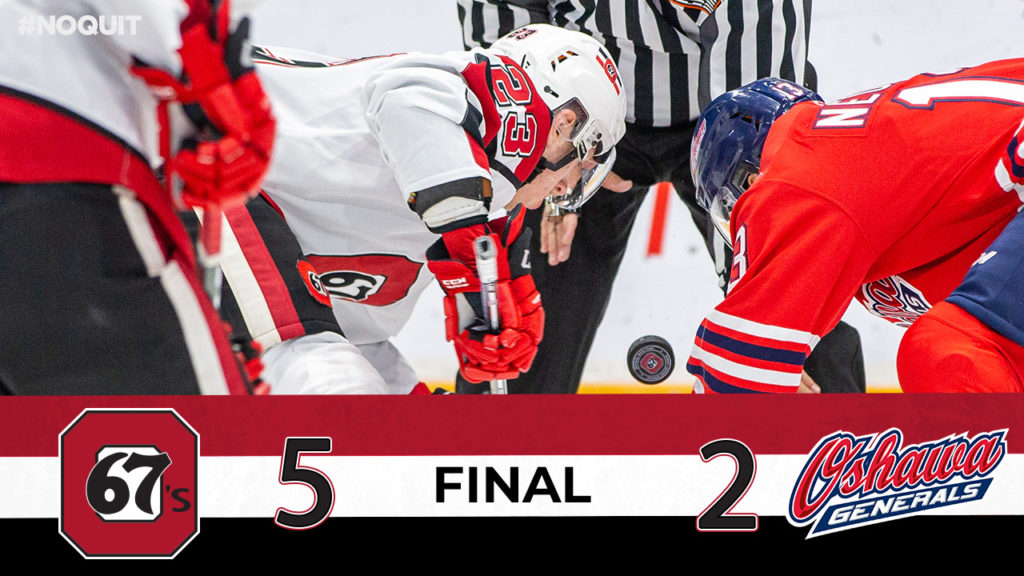 The Ottawa 67’s started off the new year and decade on the right foot, by tying a franchise record with their 14th consecutive win, a record that was first set in 1972-73, matched in 1998-99 and then again in last season’s playoffs.  To do so, the Barber Poles came through with a convincing victory over their conference rivals, the Oshawa Generals, by a score of 5-2.  Joseph Garreffa and Jack Quinn both scored twice, while Cameron Tolnai also added a goal in the winning effort.  Goaltender Cedrick Andree made 28 saves in front of the Ottawa cage.

It took only 2:39 for the 67’s to open the score, when Garreffa made it 1-0 with his 19th of the season.  Tolnai went on to make it 2-0 halfway through the period by jamming a loose puck behind Generals goalie Zach Paputsakis.

Two quick goals were split by both sides early in the second, one by Brett Neumann to score Oshawa’s first, but Jack Quinn replied less than a minute later for the 67’s, making it 3-1 Ottawa.  Brett Harrison would make it a one goal game with a power play goal before the 40 minute mark.

Garreffa would make it 20 one the year with his second goal of the hockey game with a power play marker of his own, set up by Rossi and Hoefenmayer.  The Generals tried their best to get back in the hockey game past that point, but were only able to generate seven shots on goal in the final period.  Jack Quinn would make it 5-2 with an empty net goal.

The Barber Poles will look to make it an all-time team record fifteenth win in a row as soon as Thursday afternoon at 2:00 PM at home inside The Arena at TD Place, when they host another conference rival, the Kingston Frontenacs.