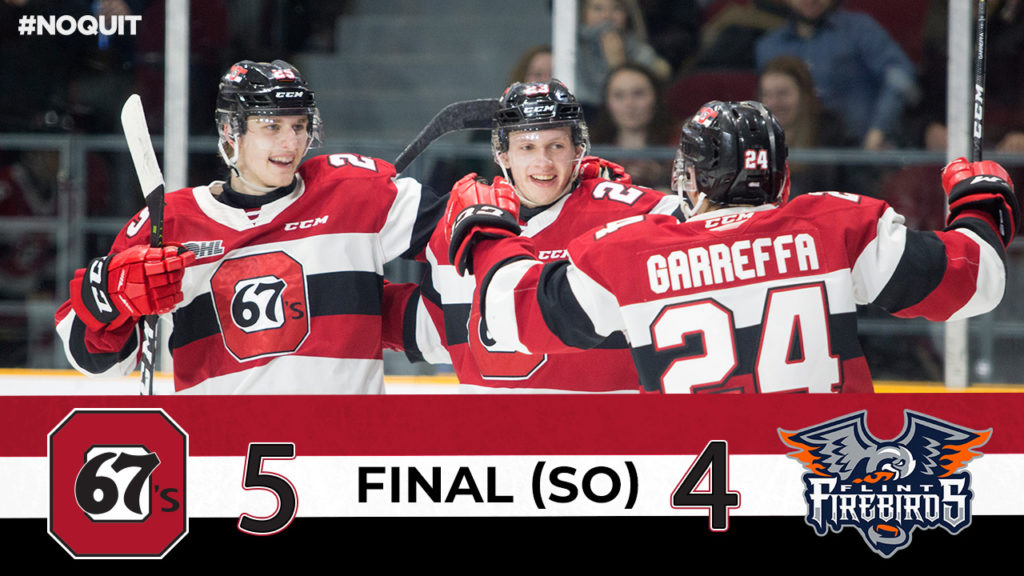 The 67’s returned to action in front of their home fans inside The Arena at TD Place, facing an interesting challenge in the Flint Firebirds. In what was probably one of the more entertaining games so far this season for the 67’s, the Barber Poles came out winners by a score of 5-4 in a shootout. Mitch Hoelscher, Jack Quinn, Marco Rossi and Joseph Garreffa were the goal scorers for Ottawa in the winning effort.

Only one goal was scored in what was an action packed opening period, but was it ever a nice one. Firebirds rookie Brennan Othmann was able to break away behind Ottawa’s defense thanks to a great feed from his teammate, before beating Cedrick Andree with a perfect shot under the bar, all of which happened in the final moments of the period, giving Flint a 1-0 lead after 20 minutes of play.

It only took 32 seconds for Mitch Hoelscher to level things up early in the second with an unassisted goal, his 22nd of the season. Jack Quinn would give Ottawa their first lead of the hockey game thanks to a power play goal set up by Joe Garreffa. Garreffa would be back at again halfway through the second, setting up Marco Rossi for his 27th of the season, giving Ottawa a 3-1 lead. Flint would however bounce back and score two quick goals late in the second, from the sticks of Braeden Kressler and Evegniy Oksentyuk, making it 3-3 heading into the third and final period.

Both teams would trade one power play goal each late in the third; Joe Garreffa gave the 67’s a 4-3 lead at 14:57 of the third, before Flint was awarded a power play of their own, which they capitalized on with just about a minute and a half left on the clock thanks to Jake Durham, sending things to the always exciting three on three overtime, which delivered for the crowd, big time. Chances were traded on each side, but a shootout would be necessary.

Seven rounds were necessary to crown a winner in the shootout, but Alec Belanger came up clutch for the Barber Poles with the shootout game-winning goal, while Cedrick Andree stopped the last five attempts he faced to secure the win for Ottawa.

“I think the crowd was great tonight, a lot of enthusiasm and a lot of atmosphere here in the building tonight. It was an entertaining game for the fans and I’m glad they had a great show.”

“We have to tighten up our game, I think we’ve given up too many goals lately. If we want to be consistent and succesful in the second half of the season, we need to tighten up our game, we have a great offense and a great power play but we rely on that way too much so I think our guys know we can be very effective defensively and we have to get back to that.”

“It was a good game for the fans, but overall, it wasn’t a great game for us. I think we’re just trying to score goal and cheating a little bit but that’s not our hockey. We should play the proper way and we’ll have to get back to that tomorrow.”

Three Stars of the game: * Joseph Garreffa (3 points) ; ** Vladislav Kolyachonok (1 assist); *** Alec Belanger (SO winner)
Jack Quinn has scored 13 goals in his last 10 games.
Quinn now has 31 goals in 39 games and he is on pace for over 50 goals.
Alec Belanger’s shootout winner was his first career SO goal.
Ottawa’s power play went 2 for 3 on the night.
Cedrick Andree made 26 saves in the winning effort.
The other scorers in the shootout for Ottawa were Joseph Garreffa and Jack Quinn.