August 17, 2010 (Ottawa, ON): The Ottawa 67’s today announced that Sean Monahan, their top pick in this year’s OHL Priority Selection Draft, has signed a contract to play for the team. The 6’ 2” centre will be on the ice with the rest of the team when they open training camp at the Ottawa Civic Centre, September 2nd.

“In Sean, we have a big-bodied, highly-skilled centreman, who should be a great addition to our returning group of forwards,” said Head Coach and Assistant GM Chris Byrne. “We were surprised that he was still available when we had our first pick (16th overall) and I’m looking forward to seeing him on the ice, developing as an Ottawa 67.”

Monahan led the Mississauga Rebels (AAA Minor Midget) to an OHL Cup Showcase Tournament championship last season with 6 goals and 7 assists in 7 tournament games, after scoring 46 goals and 90 points in the Rebels’ 47 regular season games. The OHL’s Director of Central Scouting, Robert Kitamura, says Monahan is the complete package: “Monahan has a solid collection of physical tools. He has size, an excellent stick and he skates quite well. He uses his quickness to get himself into the open ice and loves to have the puck on his stick.”

Fans will get their first chance to see Monahan and the rest of the 67’s on the ice on Sunday September 12th when they host the Kingston Frontenacs in an exhibition game starting at 2:00 PM. Ticket information is available at www.Ottawa67s.com. 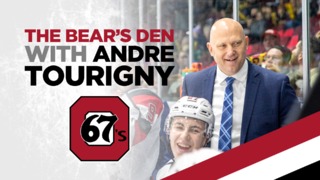 Welcome Back Graeme Clarke!
3 days ago