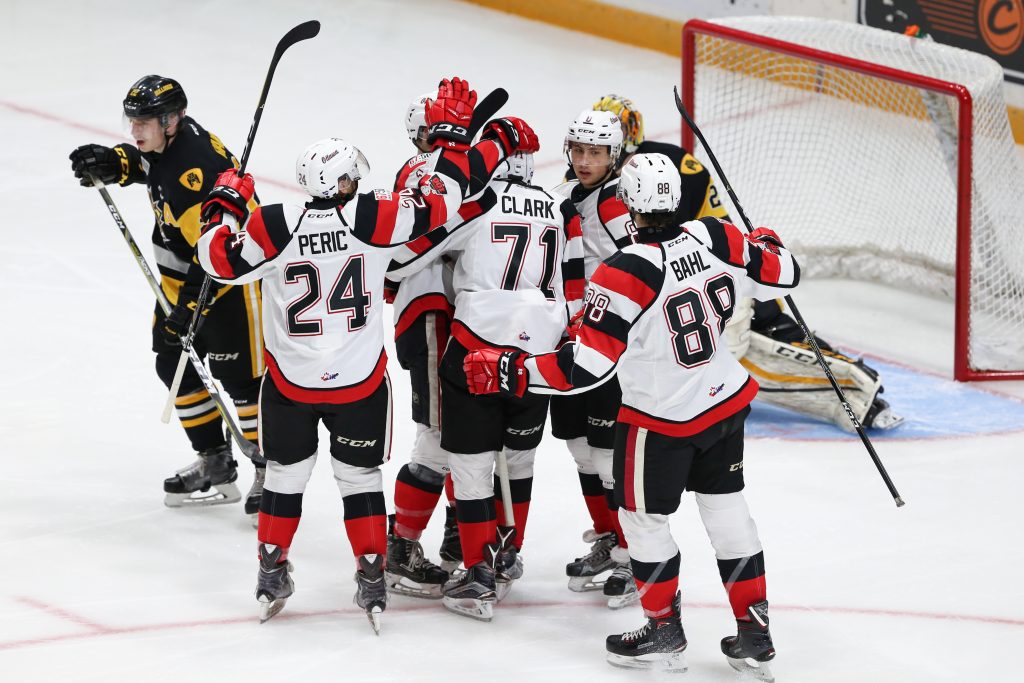 While the relentless effort from the Ottawa 67’s was on display until the final whistle, their 50th Anniversary Season came to a close on Friday night in Hamilton falling 4-1 to the Bulldogs who claimed a 4-1 series victory.

One of the youngest teams in the OHL forced the veteran-laden Hamilton Bulldogs to bring their best in the opening round series that saw the 67’s have their chances against the top-seeded Eastern Conference side.

For the first time this series, it wasn’t a member of the Bitten family to open the scoring, but it was the Bulldogs that set the tone through Matthew Strome’s second of the series before the five-minute mark of the first period.

Just over seven minutes later the Bulldogs spotted themselves a two-goal lead through Nicholas Caamano’s powerplay tally sending Hamilton into the locker room up 2-0 after the first period.

Tye Felhaber cut Hamilton’s lead in half at the halfway mark of the second period with Chmelevski and Barron drawing the assists.

Less than two minutes later Brandon Saigeon, who was dangerous for Hamilton all series, notched his seventh goal to restore the two-goal Bulldogs lead that they carried into the second intermission.

Ottawa pressed hard in the third, but despite the resilient nature that has turned the tide for them many times throughout the 2017-18 season, they were unable to overcome the Bulldogs on this night.

Isaac Nurse potted an empty net goal to solidify the series win and a spot in the second round for Hamilton.

GAME NOTES
• After being outshot 19-4 in the first period, Ottawa outshot Hamilton 21-9 the rest of the game
• The 67’s edged the Bulldogs 36-33 on faceoffs with Sasha Chmelevski winning 10 of 15
• Kody Clark led the 67’s with four shots on the night
• Hamilton’s Brandon Saigeon lead the Bulldogs in scoring with seven goals in five games.
• Prior to Friday’s game, it was announced that 67’s captain Travis Barron has signed his entry-level contract (three-year deal) with the Colorado Avalanche.