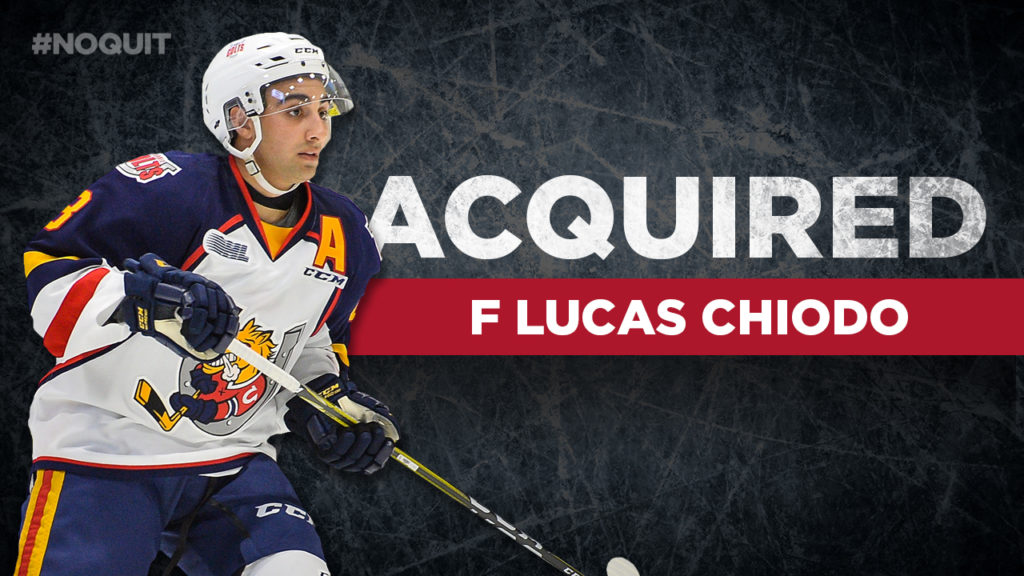 The Ottawa 67’s made their second big trade in 24 hours on Wednesday, acquiring winger Lucas Chiodo from the Barrie Colts.

In exchange, the 67’s sent Sault Ste. Marie’s third-round pick in 2021, Kingston’s second-round pick in 2024 and the rights to Shaw Boomhower to the Colts for the 20-year-old Churchill, Ontario native. The OHL trade deadline for overage players was at noon on Wednesday.

“Lucas is a top-15 scorer in the league and a player who plays in all situations,” said 67’s General Manager James Boyd. “His addition improves the depth and versatility of our team.”

On the heels of Tuesday’s deal that brought Kyle Maksimovich to Ottawa, the 67’s have added even more offensive power to their lineup with this latest deal. In 39 games this year, Chiodo has 19 goals and 31 assists for 50 points. He had 12 points in 12 playoff games for the Colts last season.

“‘I like a lot of things about Lucas; he’s a hardworking and relentless player who has playoff experience and that has been successful in the playoffs,” said 67’s Head Coach and VP of Hockey Operations Andre Tourigny. “I think we have a really good team, but in order to be even better, it’s good to have more experience to our team and that’s what we added today.’’

The 67’s hit the road Thursday for a busy weekend that will see the club make stops in Sarnia (Friday), London (Saturday) and Guelph (Sunday). Ottawa will be back on home ice on January 18 when they host the Peterborough Petes on Dunder Mifflin Night at The Arena at TD Place.