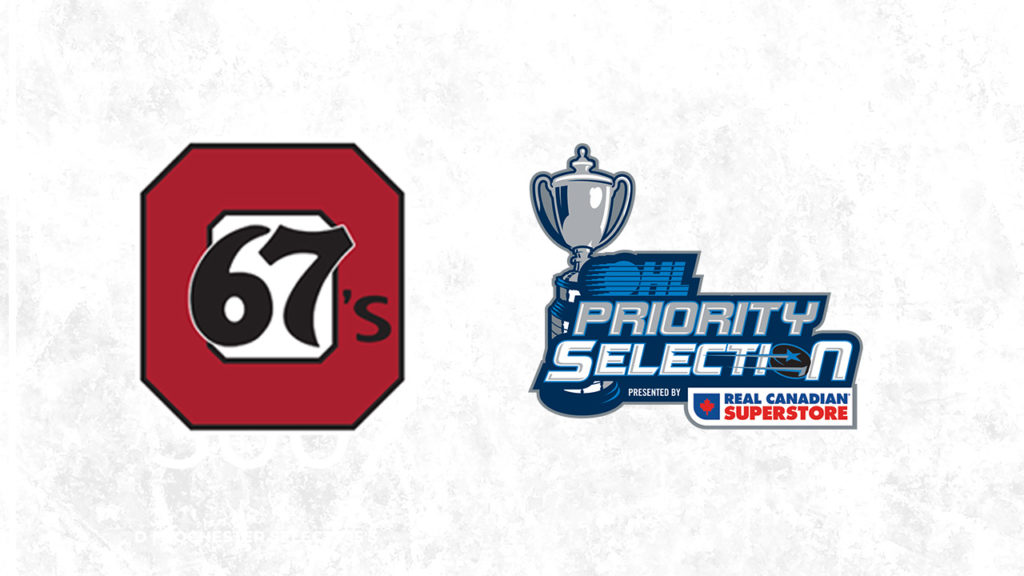 The Ottawa 67’s added 15 prospects to their pool on Saturday, during the annual OHL Priority Selection Draft.  In total, the Barber Poles selected 7 forwards, 6 defencemen and 2 goaltenders.

“We are happy with the way the draft played out for us,” said 67’s General Manager James Boyd. We were able to add skilled players at each position and a group of players with upside that we are excited to begin working with. All in all a successful day for the 67s.”

Below are all the details on the 15 players that the Ottawa 67’s selected on Saturday:

Moldenhauer is a 5-foot-9, 154 pound right winger who played a pivotal role with the Toronto Titans Minor Midget AAA this past season, putting up over a point a game with 23 goals, 16 assists for 39 points in 33 games, before having a stellar postseason with 6 goals and 3 assists in 7 games.  Moldenhauer is described as a skilled player who will be an offensive threat in the OHL that possesses both good goal scoring and playmaking ability.

“Nicholas is a player we coveted all year,” said 67’s GM James Boyd. “He possesses high end hockey sense and competitive level who can play the game fast at any forward position. We are excited to see Nick in a Barber Pole Jersey.”

With their second pick in the draft, the 67’s selected Brady Stonehouse, a left-hand shot winger who put up no less than 54 points (22G, 32A) in 32 games this year with the Elgin-Middlesex Chiefs.  Stonehouse also had a great postseason with 15 goals and 14 assists (29 pts) in 16 games in the playoffs with his team.  Not only is Stonehouse considered a skilled, talented player, but he is also seen as a hard working player who will truly fit in the 67’s no quit DNA.

“Brady’s is one of the fastest skaters in the draft. He has quick hands and his aggressive style is very difficult to play against. 67’s fans will enjoy the effort level he brings each game,” said James Boyd.

Thomas Sirman was the third player picked by the Barber Poles on Saturday, with the 60th overall pick in the third round.  Sirman is a 5-foot-10, 173 pound left-shot defenceman who will fit in well with the 67’s young defensive core.  Sirman collected a goal and 14 assists in 32 games this past season with the Toronto Jr Canadiens, before notching down 2 goals and 7 assists for 9 points in 11 playoff games.  Fun fact, Thomas’s older brother Will played two games for the 67’s in the 2018-2019 season.

With their fourth round selection, the 67’s drafted six-foot, 150 pound left handed defenceman Matthew Mayich from the Hamilton Huskies, who collected 7 goals and 19 assists (26 pts) in 33 games in the regular season, before putting up one goal and 7 assists for 8 points in 15 playoff games.

Couchie was the fifth player selected by the 67’s. The 6-foot, 160 pound center had 14 points (5 goals, 9 assists) in the regular season with the London Jr. Knights in MMAAA, before putting up 4 points (1G, 3A) in 9 playoff games.

A six-foot, 150 pound right winger, Puley had a good season with the Toronto Jr. Canadiens this past year with 11 goals and 11 assists in 29 regular season games, before putting up 4 goals and 3 assists in 11 GTHL playoff games.

Henry was a standout this past season for the Rochester Selects with 51 points (20G, 31A) in 55 games.  The 5-foot-11, 181 pound Auburn NY native is a defenceman who could eventually become a great addition to the 67’s blueline.

The first of two goalies to be selected by Ottawa in this draft, MacKenzie had a good year with the Waterloo Wolves.  During the regular season, he maintained a goals against average of 1.67 plus two shutouts in 18 season games, before posting a 1.36 GAA in 14 playoff games and an impressive 5 shutouts in the postseason.

The 67’s went local with their 9th round pick, selecting HEO Ottawa Senators MAAA forward Will Gerrior.  The small, feisty forward posted 44 points (29G, 15A) in 45 games this past season.

In the 10th round, Ottawa selected out of the prestigious Detroit Little Ceasar’s program goaltender Cameron Korpi.  Standing at 6-foot-1, Korpi had a GAA of 1.52 in 7 games this past season.

Another local pick for Ottawa in Arnprior native Ryland Landon.  The six-foot-one blueliner had 14 points (4G, 10A) in 44 games this past season with the Pembroke Lumber Kings.

The second defenceman from the Rochester Selects to be picked by Ottawa in this draft, Powell had a good year with 48 points (17G, 31A) in 63 games this past season.