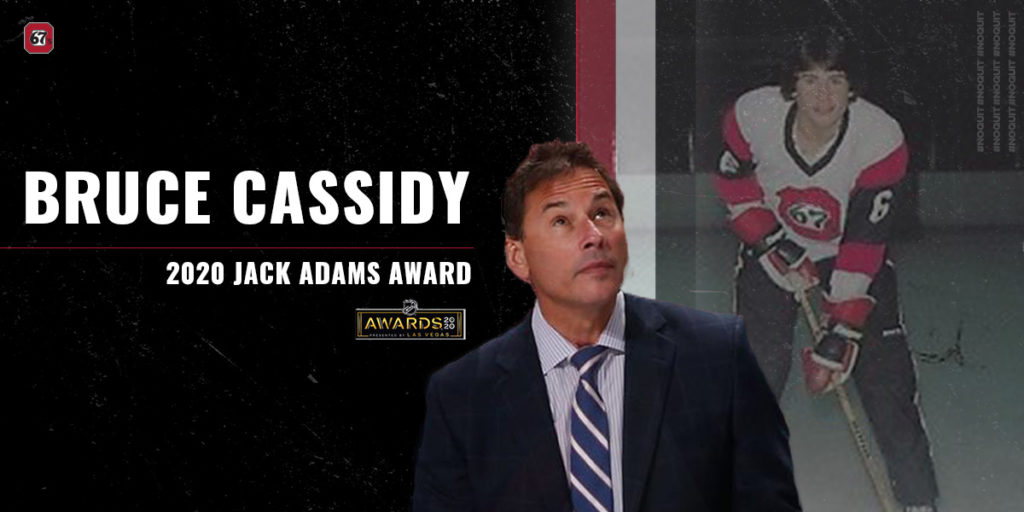 An Ottawa 67’s Alumni received a tremendous honour on Wednesday evening, as Bruce Cassidy was named the recipient of the NHL’s 2019-2020 season Jack Adams Award.
Given to the league’s coach of the year, this is marks the first time the Ottawa 67’s legend has won in an NHL coaching career that has spanned 371 games to date. Cassidy edged out the other two quality nominees for the award, John Tortorella and Alain Vigneault.

In what was a shortened NHL season, Cassidy coached the Bruins to a 44-14-12 season, which was good enough to earn the B’s the President’s Trophy, awarded to the regular season champions in the NHL. Boston’s league best goal differential of +53 (227 goals for, 174 against), was the best in the league, putting on full display a high-octane offensive style, that can also limit opponents’ goal scoring.

“Bruce’s work with the Bruins has been a model of consistency and hard work for many years. He gets the best of his players year after year. His humility and professionalism is a true model for us. He fully deserves such an honor. He makes the entire 67’s family and the Alumni community very proud,” said current Ottawa 67’s Head Coach and the recipient of the 2019-2020 Brian Kilrea Award (CHL Coach of the Year), André Tourigny.

67’s faithful will remember Cassidy as a tremendous talent and the largest “what if” in 67’s history. The Ottawa product played phenomenally during his junior career, bursting onto the scene with 25 goals and 111 points as a rookie defenceman. Cassidy would be named rookie of the year and the following season would represent Team Canada the World Juniors and win the Memorial Cup. Ultimately, Cassidy would sustain two serious knee injuries that would limit his NHL career to only 36 games played. However, those injuries did not keep Cassidy out of hockey. At 55 years young and a first Jack Adams Award under his belt, with a record of 208-113-41 (and 9 ties during his time with the Washington Capitals from ’02 to ’04) as an NHL head coach, the future is bright for Cassidy, as he has emerged in one of the top coaching minds in The Show.