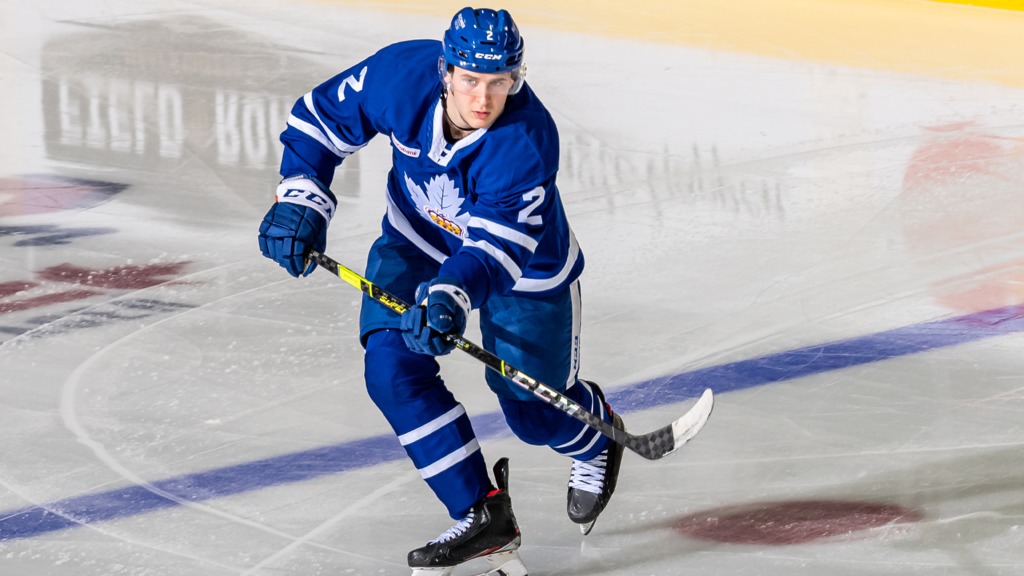 It was another big week for the current members of the Ottawa 67’s, picking up more valuable wins, and extending their lead at the top of the Ontario Hockey League, but for the club’s alumni, it was equally as impressive. Here’s who’s hot right now.

With their Saturday trip to Erie rescheduled, thanks to the massive snowstorm around Lake Erie, the Barber Poles had the chance to catch the action at Scotiabank Arena in Toronto.

Through 13 games this season, Hoefenmayer has scored 12 points, including two goals. Since turning pro in 2020, Hoefenmayer has split time between the AHL’s Marlies, and the ECHL, with both the Wichita Thunder and the Newfoundland Growlers. After scoring 40 points in 46 games with the Growlers last season, the six-foot blueliner has already set an AHL career high for points in a season.

Scoring at a high rate is nothing new for Hoefenmayer, who capped off his 67’s career with a massive overage season, scoring 26 goals and 82 points in just 56 games. Hoefenmayer ranks fourth all-time in games played for the 67’s, and ranks 41st (sixth among defencemen) in points, with 222.

On Friday night, Nikita Okhotyuk scored his first goal of the season, in the Utica Comets’ 3-2 win over the Rochester Americans. The second-round draft choice of the New Jersey Devils in 2019 has been sidelined with an upper-body injury, forcing him to miss seven games, but since getting back into the lineup, Okhotyuk has found comfort, and a pair of points.

The Chelyabinsk, Russia native has carved a place for himself with the Devils’ AHL affiliate over the past three seasons, spending the majority of the 2021-22 season with the Comets, outside of a handful of games in the NHL. Okhotyuk has become known for his defensive abilities, and seldomly scores at a high rate, but since returning from injury, he has scored two points in five games.

Okhotyuk was selected by the 67’s with the 16th pick in the 2017 CHL Import Draft, and quickly became a defensive force with the team. Featuring on two of the best 67’s teams in history, Okhotyuk wrapped up his OHL career after COVID-19 brought an early end to the 2019-20 season. He finished his time in the nation’s capital with 10 goals, and 37 assists in 148 games.

For the second time this season, defenceman Kyle Auger found the back of the net for the Lakehead University Thunderwolves. The goal came late in the first period of Lakehead’s Friday night game against the TMU Bold, a decision they won 4-3 in overtime.

Points haven’t always been easy to come by for Auger, but when they have come for him, it has been in bunches. Currently, with seven points in 13 games, Auger put together a five-game point streak, where he scored six points, including his only other goal of the season. It’s his third season with the Thunderwolves.

Auger’s time with the Barber Poles was short, playing just 53 games across two seasons. In his OHL career, Auger suited up in 81 games, spending the first 28 games of his career with the Windsor Spitfires, scoring three goals and 12 points. Auger is majoring in Business at Lakehead, in his senior year.

In HK SŽ Olimpija’s 4-2 loss to HC TIWAG Innsbruck on Saturday, Joe Garreffa picked up an assist on Miha Zajc’s game-tying goal, extending his point streak to four games. During the streak, the Toronto, Ontario native has scored five points, including two goals.

After splitting time between the AHL and the ECHL last season, Garreffa made the transition to the ICEHL, with Slovenia-based side, HK SŽ Olimpija. The season has treated the 23-year-old well, and he has scored five goals to go along with seven assists in the first 18 games of the season.

Garreffa was acquired by the Barber Poles early in the 2019-20 season from the Kitchener Rangers, and turned in a spectacular overage season, scoring 36 goals and 90 points in 52 games. He finished his OHL tenure with 108 goals and 315 points in 297 games, and was named the alternate captain during his final season in Kitchener.

Logan Couture with five goals in past six games

Perhaps one of the most prolific 67’s alumni currently in the National Hockey League, Logan Couture continued doing what he has done for the past 13 seasons for the San Jose Sharks; score. Over the past six games, Couture has heated up, scoring five goals, and adding another two assists, aiding the Sharks to three consecutive road wins.

Since being selected ninth overall by the Sharks in the 2007 NHL Entry Draft, Couture has become a mainstay on California’s coast, being named the team’s 10th captain in 2019. As Couture pushes ever closer to 1,000 games played (currently at 865), the production isn’t falling off. The 33-year-old has scored nine goals and 15 points in 20 games, this season.

Couture’s time with the 67’s was certainly special, suiting up for 232 games, scoring 111 goals and another 176 assists. Couture’s final season with the Barber Poles was by far his best, finishing the season with 87 points, and having the honour of being named the team’s captain, certainly a cherished achievement under the legendary Brian Kilrea.