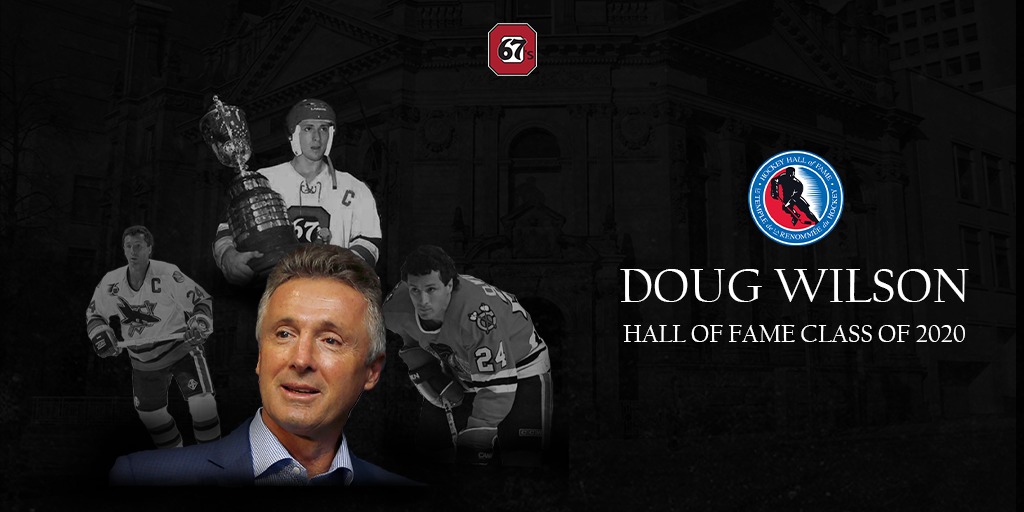 With his jersey already hanging from the rafters inside The Arena at TD Place, Ottawa 67’s legend Doug Wilson will become the second player in franchise history to be inducted into the Hockey Hall of Fame’s players category, today, joining the great Denis Potvin.

A member of the 2020 Hall of Fame class, whose induction was delayed by a year due to the COVID-19 pandemic, Wilson receives his call to the Hall alongside Marian Hossa, Jarome Iginla, Kim St-Pierre, Kevin Lowe, and Ken Holland.

Wilson, 64, is a local product, who joined the 67’s — then of the Ontario Major Junior Hockey League — for the 1974-1975 season. The defenceman started his career on a tear, scoring 29 goals and 58 assists for 87 points in 55 games. Wilson also scored two goals and three assists in seven games during the 1975 playoffs.

In his sophomore season, Wilson potted 26 goals and 62 assists for a career-high 88 points, also tallying 15 points in 12 postseason games.

Wilson’s final campaign with the 67’s, in 1976-77, saw him limited to 43 regular-season games, but still managing to put up 25 goals and 54 assists for 79 points. During that year’s 24-game run to the Memorial Cup Final, Wilson racked up six goals and 30 assists for 36 points, as the Barber Poles came up one goal short in the championship game.

Drafted sixth overall by the Chicago Blackhawks in 1977, Wilson went on to become one of the most decorated defencemen in franchise history. He still holds the franchise records for goals and points by a defenceman, and was named to seven All-Star Games during his tenure. Wilson won the Norris Trophy in 1982 as the NHL’s premier defenceman, while being named a First Team All-Star that season. He was named to the Second All-Star Team in 1985, and again in 1990.

Wilson was acquired by the expansion San Jose Sharks ahead of the 1991-92 season, and subsequently being named the first captain in franchise history. He played the final two seasons of his career in San Jose, totalling 48 points in 86 games. In 2003, Wilson was named the team’s general manager: a position he holds today, as the second longest-serving active GM in the NHL.

His jersey number ‘7’ was retired by the 67’s in October 1998, and Wilson was inducted into the Ottawa Sports Hall of Fame that same weekend.

Wilson, and the entire Hockey Hall of Fame Class of 2020, will be inducted in a ceremony at Meridian Hall in Toronto, today.