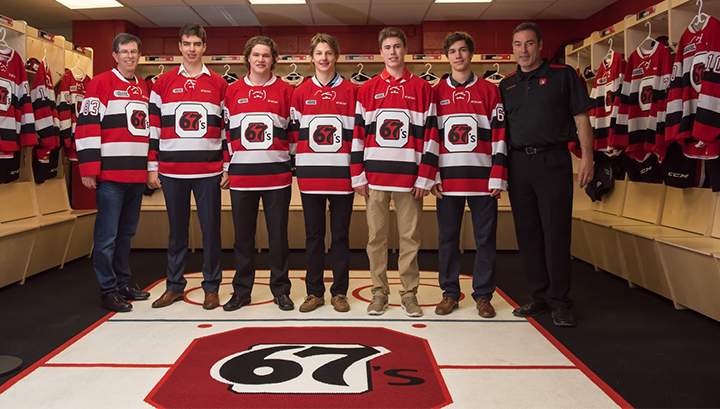 Ottawa, ON – The future is bright for the Ottawa 67’s with a new crop of talent set to join the team this Fall. 67’s GM and head coach Jeff Brown announced Monday that the hockey club has signed 2015 draft picks Kody Clark and Ben Evans, along with 2016 first round pick Peter Stratis and both second round picks in Carter Robertson and Kevin Bahl.

“This is the future. And the future is bright,” said Brown. “We’ve got guys with great hockey brains that are very competitive and great teammates.”

“We’ve put ourselves in a solid position going forward. These are character guys that are going to be a big part of our hockey club this upcoming year and will be leading us in the future.”

Joining the 67’s for the 2016-17 OHL season will be a pair of 2015 draft picks in Kody Clark and Ben Evans. Clark, the son of former Maple Leafs captain Wendel Clark, was a point-per-game player this past season at St. Andrew’s College and proved a dangerous setup-man the year prior with the Toronto Marloboro’s. Centreman Ben Evans has registered 100 points in his last two seasons split between Fort Erie (GOJHL) and the Southern Tier Admiral. The Thorold, ON native has 36 goals and 64 assists in 77 games.

“These were our two best players in development camp,” remarked Brown. “They are skilled players that are smart, play with their head up and play both ends of the rink.”

In the 2016 OHL Draft, Brown build his back end by selecting three defencemen in the first two rounds. Scarborough, ON native Peter Stratis was taken in the first round (11th overall) while Robertson and Bahl were claimed in back-to-back second round picks (30th and 31st overall). The trio boast size, skill, a good hockey IQ and offensive upside.

“These guys are all smart, mobile, skilled defencemen that will play for us for a long time,” said Brown. “We certainly didn’t go into the draft planning on taking three defencemen in a row. We had each of these guys pegged as first-round picks and you can’t pass up good defense.”

The 2016 NHL Entry is set for next weekend – June 24-25 – in Buffalo and the 67’s have four draft eligible players – forwards Travis Barron, Drake Rymsha and Dante Salituro, as well as 6’8 defenceman Stepan Falkovsky.