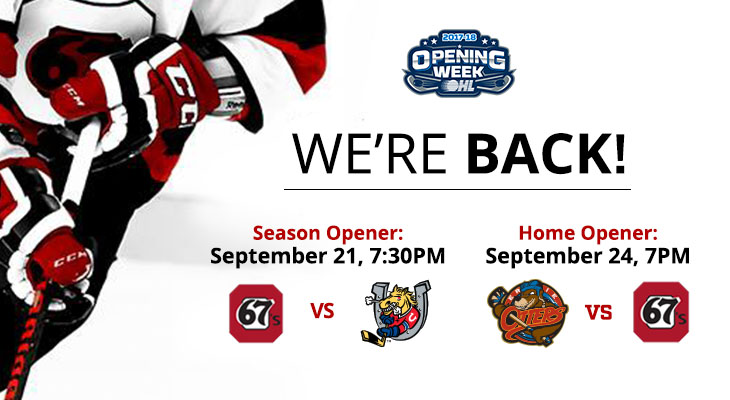 After announcing on Monday that they will host the Memorial Cup finalist Erie Otters on September 24 in their home opener as celebrations commence in honour of their 50th Anniversary Season, the Ottawa 67’s unveiled their complete 68-game schedule for the 2017-18 season. The hockey club’s golden anniversary will feature 68 games starting September 21 in Barrie against the Colts, concluding the regular season 179 days later at The Arena at TD Place on March 18 against the North Bay Battalion.

“We have a lot in store for our fans this season as we collectively celebrate 50 years of junior hockey in the nation’s capital,” said 67’s Governor Jeff Hunt. “The regular staples will be there – School Day Game, Teddy Bear Toss, Family Day Game and Fan Appreciation Day – and we’ll also have plenty of games celebrating the past, present and future of one of the most revered teams in junior hockey.”

The 67’s will host 14-games on Sundays, including their home opener against Erie and Fan Appreciation Day to close out the regular season.

There will be plenty of hockey action at TD Place on Friday nights with seven games and another nine on Saturdays.

The 68-game calendar also includes a home-and-home series with their cross-river rivals – the Gatineau Olympiques. Ottawa will host the first game on December 17 before crossing the river for the rematch on January 12.

Ottawa will open the season with 11 of their first 16 games away from home, but will enjoy a series of 11 home dates from mid-January through mid-February with just one away game during that time.

The 67’s are planning several special game nights in celebration of the team’s 50th Anniversary Season. Details will be announced leading up to training camp.