67’s beat by the buzzer on Family Day thriller 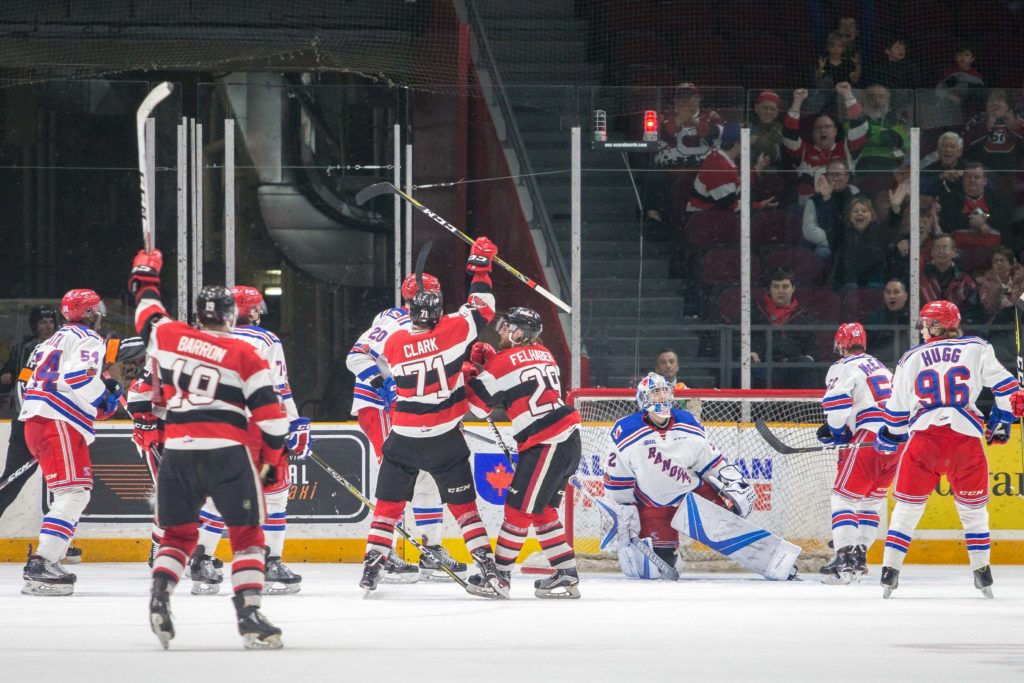 The only thing that can seemingly stop the come-from-behind kids from Ottawa is the buzzer. A loud and energized Family Day crowd helped the 67’s mount a comeback against the Kitchener Rangers (ranked 6th in the nation), but Austen Keating’s game-tying goal was snuffed out by the buzzer as the 67’s fell 3-2 – their first regulation loss on home ice in nine contests.

The goaltenders stole the show in the first period as Olivier Tremblay turned aside 11 Kitchener shots, while his counterpart Mario Culina denied the six Ottawa shots.

Adam Mascherin’s 36th goal of the year broke the deadlock just over five minutes into the second period as the Rangers struck with the man advantage.

With under five to play in the second, Keating spotted a pinching Noel Hoefenmayer who showed off his good hands to beat Culina to tie the game at 1-1 after 40 minutes.

The intensity picked up in the third and the visitors once again broke the tie, this time through Greg Meireles midway through the period. With less than four minutes remaining, Kole Sherwood gave Kitchener the first two-goal lead of the game and thought he had sealed the win for the Rangers.

The red-hot Tye Felhaber answered back with his 25th of the season with Olivier Tremblay on the bench and 27 seconds left in the game to make it 3-2. The goal extended Felhaber’s point streak to nine games.

Of the ensuing face-off the 67’s pressured Kitchener deep in their own zone and following a point shot the loose puck found Keating who roofed the shot over Culina’s shoulder to send the crowd into euphoria – albeit short-lived as the play would be reviewed and it was determined that the puck crossed the line after time had expired.

The 67’s now head out on a five-game road trip starting Thursday night in Windsor followed by stops in London (Feb. 23), Kitchener (Feb. 25), North Bay (Mar. 1) and Hamilton (Mar. 2) before returning home on March 4 to host the London Knights at 2 p.m.

WHAT THEY’RE SAYING
Head Coach Andre Tourigny
On the team’s ability to comeback … “Lately we made comebacks because we played well without the puck. Tonight we weren’t as good, but our guys showed a lot of resiliency, they fought back, they played with a lot of passion. I’m really proud of them.”