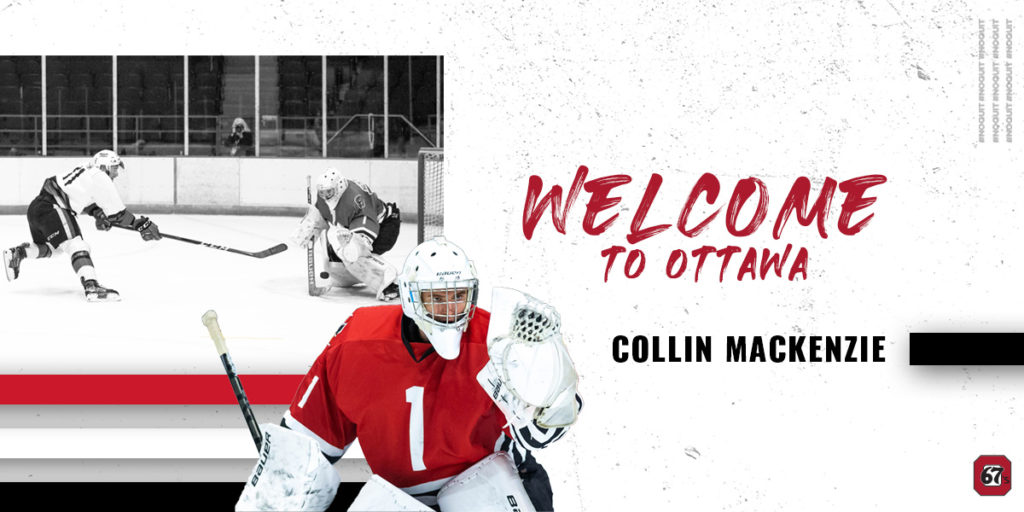 The Ottawa 67’s have added to a talented crop of goaltenders, with the commitment of 16 year-old netminder Collin MacKenzie.

“Collin MacKenzie is a very athletic goaltender, who reads the play very well, and demonstrates great patience on the ice,” said general manager James Boyd, “We were very impressed with his dedication, evidenced by his level of physical fitness, and excellent performance in training camp.”

MacKenzie, who was drafted by the Barber Poles in the eighth round of the 2020 OHL Priority Selection, hails from Elora, Ontario. Before arriving in Ottawa, he starred with the Waterloo Wolves AAA program, recording five shutouts and a 1.63 save percentage in 35 games from 2018 to 2020. Mackenzie capped off his draft year with a lights-out performance in the 2020 playoffs, posting a save percentage of 1.36 and five shutouts in 14 games. He also represented Ontario at the U15 World Selects Invite in 2019.

Appearing in goal for all three of Team Red’s intrasquad scrimmages throughout the 2021 67’s training camp, MacKenzie turned in a marvelous performance, only surrendering one goal over the entire weekend. He joins a Barber Poles crease with no shortage of high-end ability, already boasting St. Louis Blues prospect Will Cranley, and Max Donoso.

The 67’s are in Peterborough on Monday, taking on the Petes for their first bit of preseason action, and first game since the onset of the COVID-19 pandemic.

Puckdrop for this exciting Labour Day contest is set for 2pm EDT, and 67’s fans can listen live on Ottawa radio TSN 1200, while also following the 67’s social media channels for live updates.