67’s bounce back with convincing win over Colts 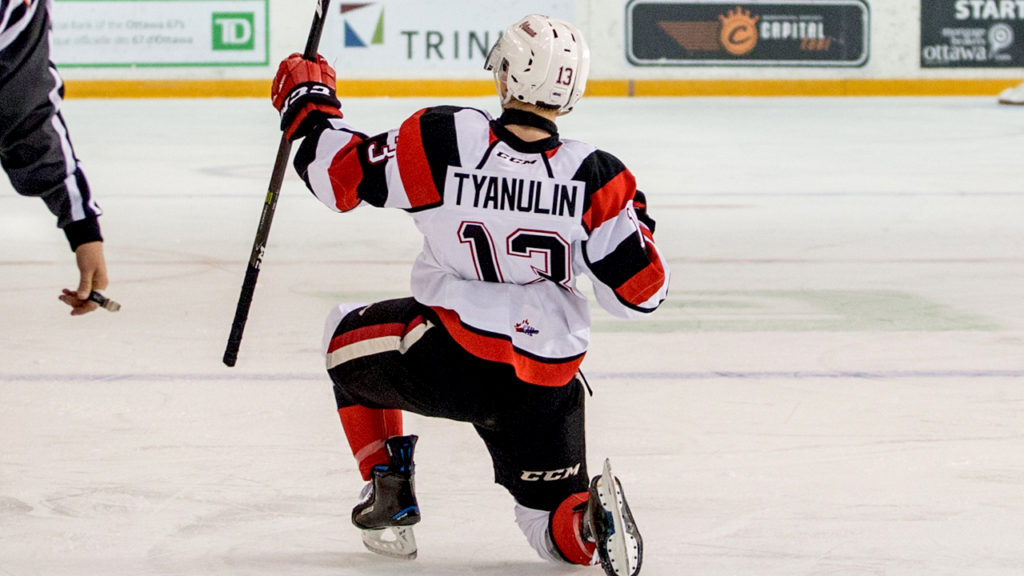 After seeing their four-game winning streak halted last night in Niagara, the Ottawa 67’s responded in the best possible way, picking up a convincing 7-3 win in Barrie over the Colts on Saturday evening.

Once gain the 67’s enjoyed a solid performance between the pipes as Olivier Lafreniere made 44 saves, while recently-acquired forward Tye Felhaber scored his first OHL career hat-trick to lead Ottawa to their fifth win from their last six games.

Austen Keating contributed three assists while Artur Tyanulinwith notched a pair of goals and a pair of assists to help lead the 67’s offense alongside Felhaber. The trio combined for 10 points on the night. Tyanulin now sits third in the OHL in assists with 25 and is in the Top-10 in points.

The 67’s added three more goals in the middle frame to take a 4-0 lead after two periods of play. After Ben Fanjoy scored a shorthanded goal for his 5th of the season, Sasha Chmelevski and Tyanulin scored back-to-back goals in a span of two minutes to increase Ottawa’s lead. Meanwhile, Lafreniere stopped all 24 shots he faced in the first two periods.

The Barber Poles continued their dominance to start the third period, adding two goals in the first half of the period to take a 6-0 lead. Felhaber scored his second of the night, followed by Tyanulin’s second tally of the game.

The Colts would score three unanswered goals after that, but it was too little late, as Felhaber scored completed his hat-trick into an empty net to deny any hopes of a Barrie come back and give his team a 7-3 win. The win is Ottawa’s eighth on the road this season and at 8-4-2 the 67’s sport the second-best road record in the OHL.

The 67’s return to TD Place next weekend for a pair of home games, as they will host the Windsor Spitfires on November 25 and the Sarnia Sting on November 26.