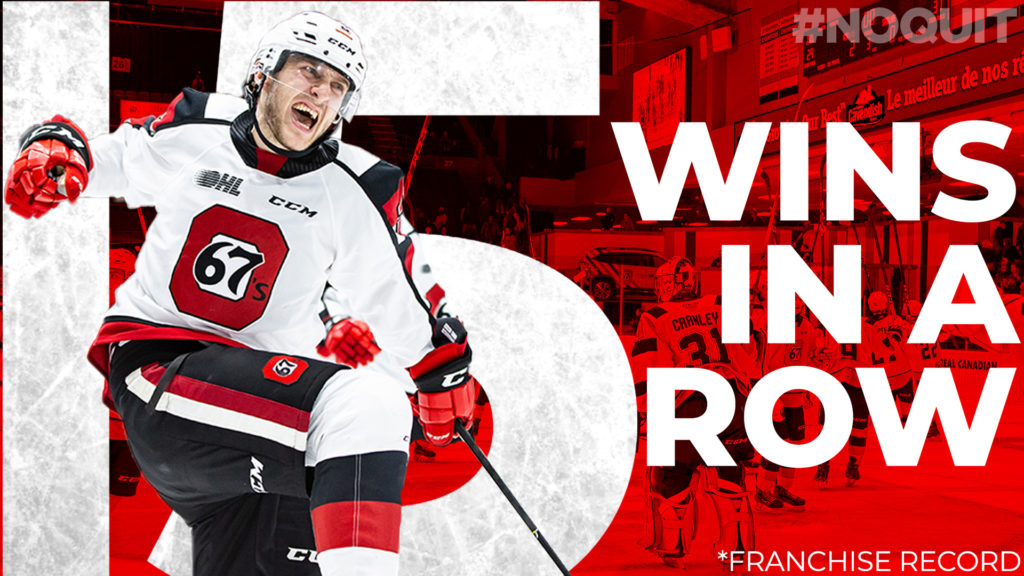 The Ottawa 67’s made it a franchise-record fifteenth win in a row on Thursday afternoon when they defeated the visiting Kingston Frontenacs by a score of 8-4.  This fifteenth straight win allows this edition of the Barber Poles to beat the fourteen consecutive game record set by two previous editions of the 67’s; the 1972-73 and 1998-99 teams.  Marco Rossi, Alec Belanger, Adam Varga and Austen Keating (twice), on top of a Jack Quinn hat trick allowed the 67’s to make franchise history.

The Barber Poles struck early with two goals in the first four minutes, coming from Rossi on a beautiful move after he had broken all alone, and from Belanger’s shot who just trickled in the back of the net.  Kingston’s Martin Chromiak made it 2-1 by tipping a puck in for his first OHL goal.

It would take just under two minutes for Adam Varga to make it 3-1 Ottawa thanks to a wicked shot that went straight into the top corning, giving the Barber Poles a two goal edge.  15-year old Shane Wright would narrow it down to 3-2 around the fifteen minute mark, before Jack Quinn and Austen Keating would give Ottawa a 5-2 lead heading into the second intermission.  Keating’s goal was a crucial one, coming on the power play with only two seconds left on the board, making The Arena inside TD Place go crazy.

Kingston came out flying with two goals to open the first half of the final period, thanks to Justin Pringle and Jordan Frasca, making it a one goal game with under ten minutes left.  Jack Quinn and Austen Keating had other plans, however.  Quinn scored the insurance goal thanks to a precise shot, before he and Keating went on to add an empty net goal each, both allowing the two player to reach important milestones; Jack Quinn’s first career OHL hat-trick and Keating’s 100th OHL goal.

The 67’s will be back in action on Sunday and will look to stretch this historic streak to 16 games when they host the Erie Otters at 2:00 PM, in what will be the 67’s annual Teddy Bear Toss game.

“It was a trap game for us.  We had a huge game yesterday in Oshawa, followed up by a long bus ride, so we knew that Kingston would come in here ready and with and edge, and we have to give them credit, they never quit.  We found a way to win, Will Cranley was a difference maker today and made some very big saves.”

On breaking the record for most consecutive wins….. “We always go one game at a time, we always stay in the moment.  That being said, congrats to our guys, this group of players, they deserve it.  They show up to the rink every day with a smile and a will to improve, always looking to get better as players but also as a team.  They have a lot of pride in our logo, so they represent very well our city and our organization.”

To thank you for being behind the team every step on the way, we are having a 24 hour flash sale for Sunday’s 2pm Teddy Bear Toss game presented by The Brick. We are offering you tickets for only $15 in the red section. Offer will be available until Friday evening, BUY NOW.