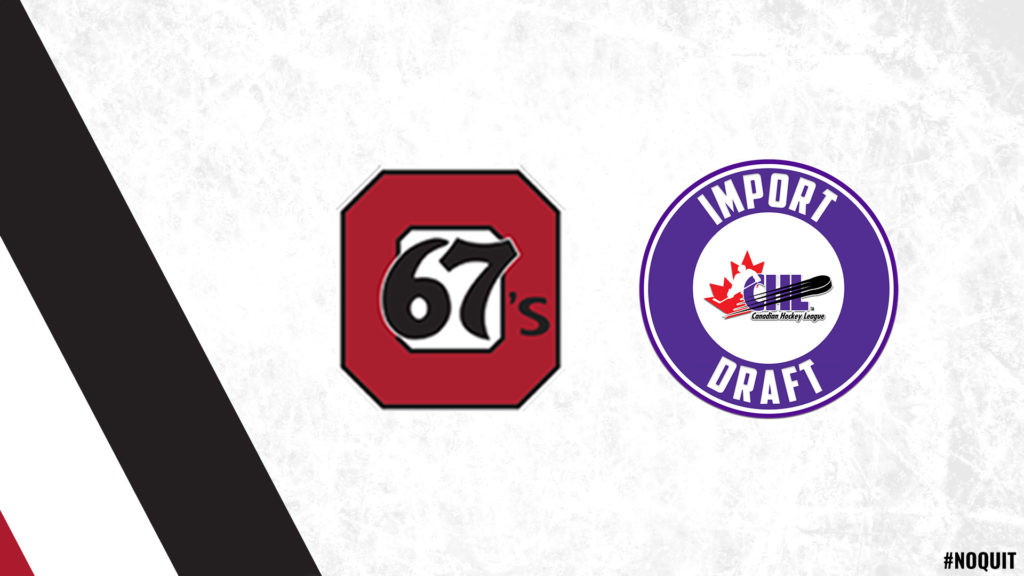 About a year ago, the Ottawa 67’s passed on the CHL Import Draft pick, with good reason, as the team was heading into this 2019-2020 with two elite import players on their roster; Austrian forward Marco Rossi and Russian defenceman Nikita Okhotyuk.

On Tuesday, June 29th, the 67’s will be picking twice in the CHL Import Draft, currently pegged in at the 57th (1st round) and 117th (2nd round) overall selections tomorrow.  They will however speak earlier for both picks, as a multitude of teams from across the CHL will be passing on their pick as they already count on two import players on their roster.  Anticipating the departures of both Okhotyuk and Rossi, as the pair should graduate to professional hockey next season, the 67’s brass is excited at the opportunity to bring in the next two European stars for the 67’s in the same draft.

The last time Ottawa picked in the CHL Import Draft was back in 2018, when the Barber Poles picked Marco Rossi with the 18th overall pick in the draft.  The rest, as they say, is history.  Rossi went on to have two stellar seasons with the 67’s counting a total of 185 points in 109 regular season games in the OHL, with 29 goals and 36 assists for 65 points in 53 games during his rookie season, before adding 39 goals and 81 assists for 120 this past season, collecting the OHL’s Eddie Powers Trophy (OHL Top Scorer), the Red Tilson Trophy (OHL Most Outstanding Player) and the CHL Top Scorer Award in 2019-2020, capping off an incredible season and at the same time, becoming the most prolific European player in 67’s history.  Rossi is seen as one of the top prospects heading into the 2020 NHL Entry Draft.

Before then, at the 2017 CHL Import Draft, the 67’s made Chelyabinsk, Russia native defenceman Nikita Okhotyuk their first round selection with the 16th overall pick.  Okhotyuk went on to play 148 games in three seasons with Ottawa, earning himself a reputations not only as a solid, stay at home defenceman who can deliver bone-crushing hits, but also as a community all-star and a player who’s personality was appreciated by everyone around The Arena at TD Place.  Okhotyuk totaled for 10 goals and 37 assists for 47 points during his time with the Barber Poles and was selected in the second round, 61st overall by the New Jersey Devils in the 2019 NHL Entry Draft.  He will be graduating to professional with the Devils organization, wearing the same black, red and white colours.

This only goes to show how impactful of a day is the CHL Import Draft to a Canadian junior hockey team is.  With these two picks, the Barber Poles were able to count on two elite players who went on to either be drafted in the second round in the NHL, or in Rossi’s case, to be the highest picked 67’s player since Sean Monahan.  James Boyd, Jan Egert, Andre Tourigny and the rest of the 67’s hockey operations staff have been working hard to find that next generation of import talent that will be rocking The Arena inside TD Place for the next couple of years.

Follow along tomorrow, as the CHL Import Draft starts at 11:00 AM, with the 67’s on the clock twice at picks 57 and 117.  You can see all live updates through this link: https://chl.ca/draft