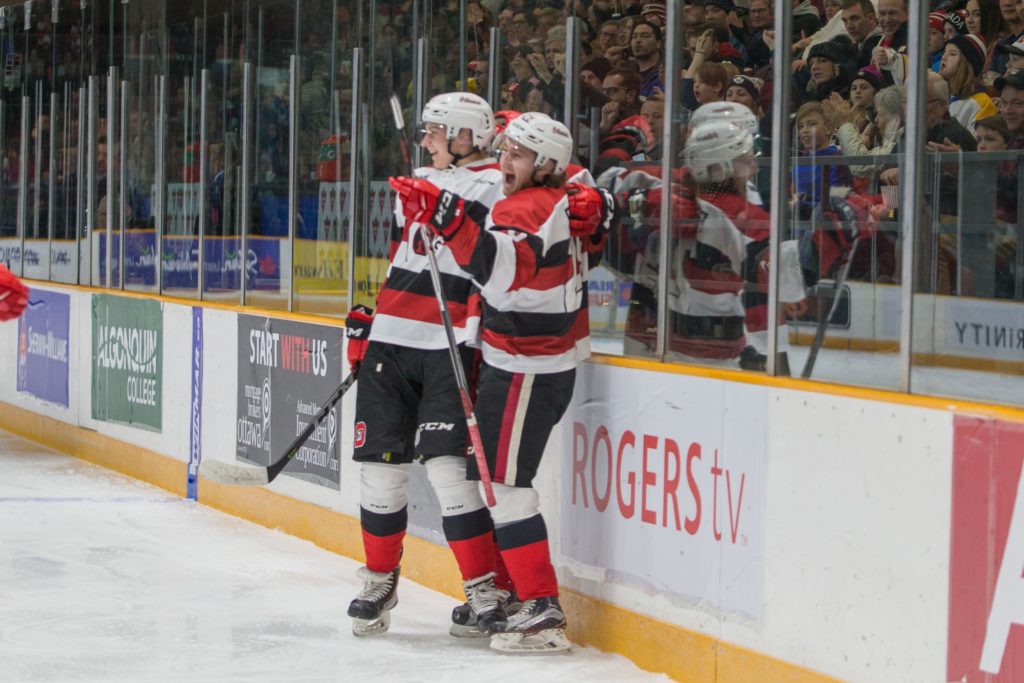 Friday marked a special night at The Arena TD Place for the Ottawa 67’s Hockey Club – marking 50 years to the night that the Barber Poles first skated on the ice at the then-named Ottawa Civic Centre. Prior to the start of the game, fans were treated to a video montage that brought them back to that special night to where it all began in 1967 and in attendance was the man who scored the first-ever goal at the Civic Centre – Pierre Jarry – who was also one of 50 players named to an illustrious list of the top 50 players in franchise history.

Unfortunately for the 67’s of present day, they suffered the same result as the Barber Poles did 50 years ago – falling to defeat. The Oshawa Generals, powered by a Kenny Huether powerplay goal midway through the third period, claimed the 4-3 win.

It was an energetic start from both sides with ample intensity and end-to-end action. A Kyle McLaren long-range shot fluttered past Olivier Tremblay at the 3:20 mark of the first period to spot the visitors an early lead. The Generals outshot the 67’s 10-6 in the opening frame, but it would be all Ottawa on the shot-clock the rest of the game.

The visitors would again strike early in the second period with Ottawa native Serron Noel lighting the lamp just 18 seconds into the middle frame.

Tye Felhaber would cut into the Oshawa lead three minutes later with this eighth goal of the season to bring the crowd to life. Ottawa would dominate almost every facet of the second period outshooting the Generals 17-7 and were rewarded with a shorthanded equalizer from Austen Keating with just over three minutes to play in the period to tie the game at 2-2. The goal was Keating’s 13th of the season and the team-leading third shorthanded marker of the year.

Oshawa would restore their lead 90 second later as Hayden McCool notched a shorthanded marker of his own sending the Generals into the locker room up 3-2 after 40 minutes.

The intensity continued to rise into the third period and Sasha Chmelevski would pull Ottawa level for a second time at the 7:49 mark that brought the TD Place crowd to their feet.

The Generals restored the lead yet again as Kenny Huether converted on the powerplay pacing the visitors to the 4-3 lead.

Despite a flurry of chances late in the game and 13 third period shots, the 67’s would come up short and fall 4-3.

Ottawa returns to action Saturday night closing out their three-games in three nights stretch in Peterborough against the Petes.

WHAT THEY’RE SAYING
André Tourigny – Head Coach
On the result tonight … “I think in the last two games we’ve worked tremendously hard and while there are always areas where we can do better I honestly can’t blame our guys for anything. The work ethic has been tremendous, we just need to improve on our special teams.”

On the importance of special teams … “You get a lot of confidence off of the success of your special teams – scoring on the powerplay or a big penalty kill – and that starts to radiate into your five-on-five play. Our penalty kill was fantastic at the start of the year and has remained quite strong, but our power play needs to pick it up.”

Assessment on the team’s play in 2017 … “You learn a lot about your team when you hit adversity. Right now we’re having a tough go. We’re not winning consistently as we did earlier in the season, especially at home. Lately, we’ve had a tough time scoring goals and finding a way to win, but that is not a reflection of our play in my opinion. I think we play better and better, but we have to find a way to win now.”