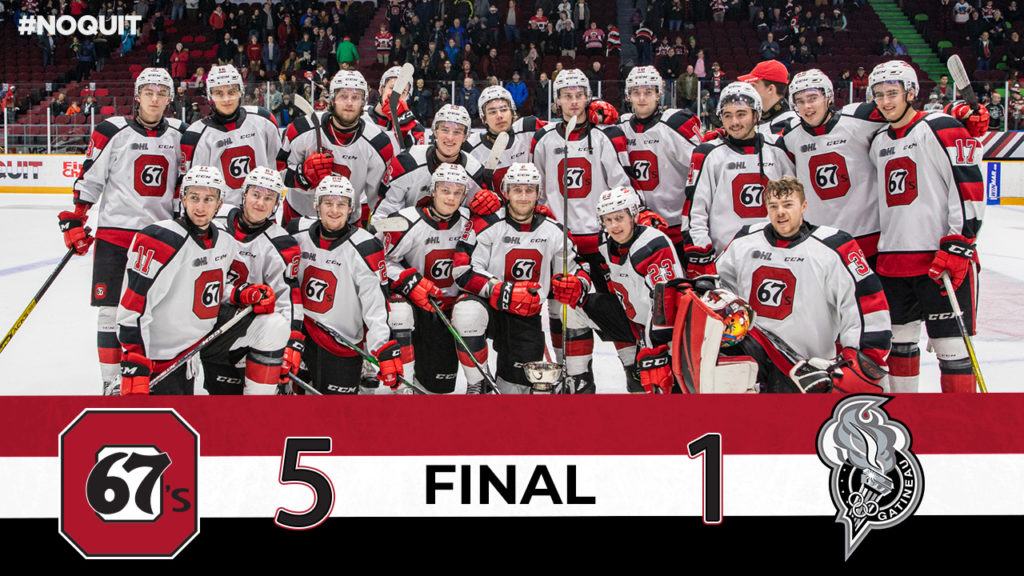 The Ottawa 67’s made it nine consecutive wins on Sunday afternoon, when they hosted the Gatineau Olympiques on the back-half of their home and home series.  After defeating the Olympiques by a score of 4-0 in Gatineau on Friday night, the Barber Poles confirmed their second Alexandra Cup victory in just as many years with a 5-1 win, allowing Ottawa to sweep Gatineau for the very first time since the creation of the Battle of the Ottawa River.  Mitch Hoelscher, Noel Hoefenmayer, Austen Keating, Marco Rossi and Jack Quinn were the goal scorers for Ottawa.

Just like they did in game one of the series, the Olympiques came out very strong in the first period.  They were also able to do in that period, something that they had not been able to in the previous matchup, and that was to beat Cedrick Andree.  Rookie Zach Dean did so by tipping a puck past the 67’s goalie on the man advantage, giving the visitors a 1-0 lead.

Only one goal was scored in the second period, but was it ever a big one.  Mitchell Hoelscher tied things up while the 67’s were killing a penalty, as the centreman zipped up the ice with the puck before finding the back of the net thanks to a precise shot, tying things at one heading into the third and final frame.

The third period, however, was all 67’s.  The Barber Poles went on to score four goals in the last twenty minutes.  Noel Hoefenmayer blasted a one-timer past Creed Jones in order to give Ottawa the lead on the power play, before Austen Keating, Marco Rossi and Jack Quinn decided to join the party, making it a final score of 5-1 for the 67’s, who all gathered around the Alexandra Cup after the game, doing so for the second straight year, but more importantly, notching down their ninth straight victory.

“We have to give them credit, they showed up for both games.  We rallied between the first and second, and from there, we felt way better on the ice, we were a lot faster on the breakout and the puck was moving a lot better on the transition, so that helped us establish some good possession time in the offensive zone.  Like I said, we have to give them credit, but on our side, Ceddy made key saves at the right moments and our special teams were key tonight with a big PK goal to tie it up followed by three goals on the power play.”