67’s come back to beat Steelheads for ninth straight win 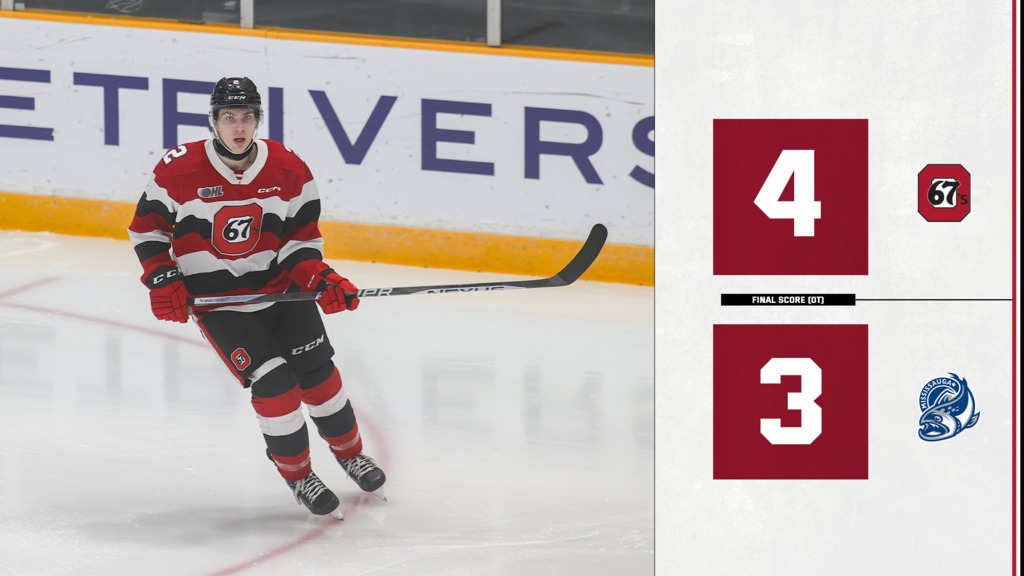 The Ottawa 67’s are never out of a game.

Down 3-1 to the Mississauga Steelheads, Sunday afternoon, and trailing in both the shots on goal totals and time of possession, the Barber Poles unleashed a furious comeback effort, and completed it in dramatic fashion. Jack Matier tied the game with 18 seconds to play, and Vinzenz Rohrer found the highlight reel overtime winner, to deliver a 4-3 win for the 67’s.

Ottawa is now 18-1-0 on the season, and have won nine straight for the second time on the campaign.

Chris Barlas opened the scoring, and Thomas Sirman was credited with Ottawa’s second. Max Donoso stopped 31 shots in goal, for his 12th win of the season.

The 67’s found themselves off to another hot start, just 6:04 in. Will Gerrior got the puck to Anthony Costantini, who threw it to the net front, and Barlas made no mistake for his fourth of the season, and a 1-0 Ottawa lead.

The game sharply turned in another direction, from there, as the Steelheads took control. They were rewarded less than a minute and a half after the Barlas goal, with Luca Del Bel Belluz scoring his 11th of the campaign, and knotting things up at 1-1.

Orleans native Zakary Lavoie found the twine at the 13:58 mark, and the Steelheads carried a 2-1 lead into the middle period.

They built on their advantage, going up by two when Del Bel Belluz scored his second of the game, just over five minutes in.

Ottawa cut into the deficit with a minute to go in the frame, on the powerplay. Ottawa Senators prospect Tyler Boucher slid the puck to Sirman at the point, and though his initial shot was stopped by Alessio Beglieri, the puck found its way in, to make it 3-2.

With time winding down, the 67’s poured on the attack. With the net empty, Matier let go a shot from the blue line that found its way in, and the Nashville Predators draft pick evened the score with 18 seconds to play, sending this one to overtime.

In the extra frame, Luca Pinelli sent Rohrer in alone with a gorgeous stretch pass, and the Montreal Canadiens third-rounder pulled out a dazzling forehand-backhand-forehand move, and capped off the comeback win for the Barber Poles.