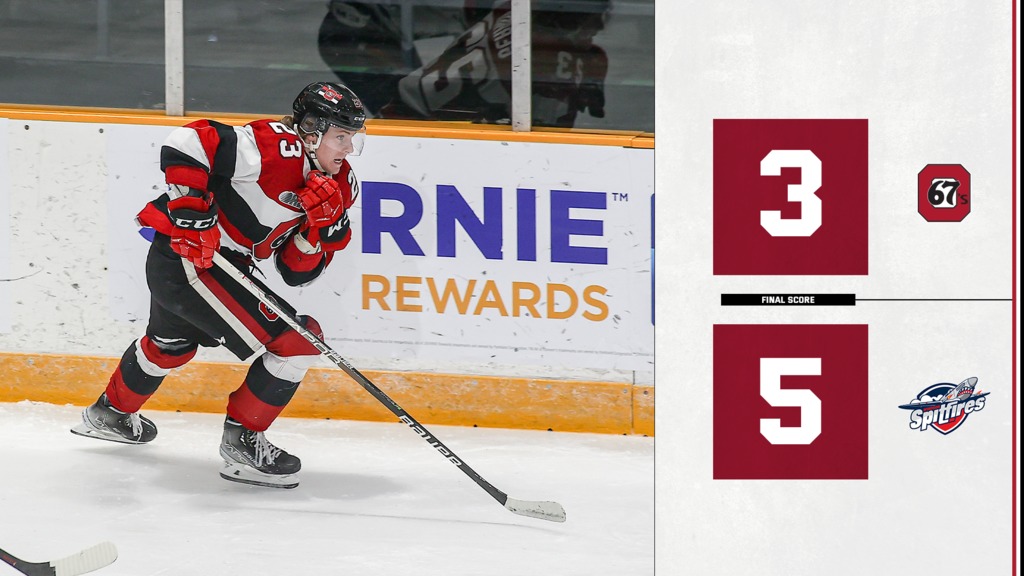 A three-game win streak came to an end for the Ottawa 67’s, Thursday night, falling 5-3 to the Windsor Spitfires, on the opening night of a three-game road trip.

Vinzenz Rohrer, Tyler Boucher, and Chris Barlas scored on three of Ottawa’s 35 shots, while Max Donoso made 20 saves, in his return to his hometown.

Windsor stormed out to an early 3-0 lead; with Jacob Maillet, and Ethan Miedema scoring within a span of two minutes and 36 seconds, before former Barber Pole Matthew Maggio gave them a three-goal lead at the 17:03 mark.

With just 36 seconds to go in the frame, however, Rohrer tipped home a Luca Pinelli shot, making it a 3-1 game.

Oliver Peer scored the eventual game winner for the Spitfires, with just under 13 minutes remaining in the middle period, and the home side took a 4-1 lead into the third.

Early in the third, Boucher streaked in down the right side, and rifled his ninth of the season past Mathias Onuska, cutting the Windsor lead to two.

Alex Christopoulos found the insurance marker not long after though, and despite a shorthanded goal from Barlas with about nine minutes to play, the Spitfires held on to hand Ottawa a 5-3 defeat.

The Barber Poles will look to get back on track, tomorrow night, when they visit the London Knights at 7:00pm.