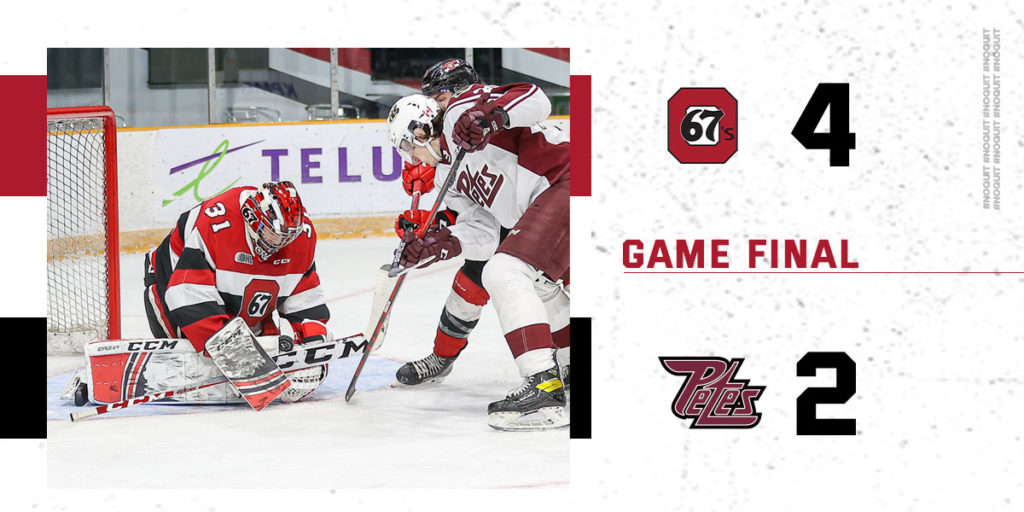 It took them 14 days to play their first game of 2022, and there were no fans in attendance to see it, but the Ottawa 67’s started the new year off on the right foot, with a 4-2 home win over the Peterborough Petes.

Brady Stonehouse scored twice for the second straight game, Vinzenz Rohrer tipped home the eventual game-winner, and Vsevolod Gaidamak iced it with an empty-netter. Will Cranley earned his second win in as many starts, with a 21-save performance.

Following some big early saves by Cranley, Stonehouse stole the puck off a face-off to his goaltender’s left, and flew down the left wing side. He rifled a quick shot past Michael Simpson to open the scoring, and give the 67’s the lead, at the 17:26 mark.

Stonehouse picked up right where he left off in the second period, with the Barber Poles on the powerplay. Will Gerrior took a feed from Thomas Sirman, and slid a cross-crease pass to Stonehouse, who banked home his second of the night, and 10th of the season for a 2-1 Ottawa lead.

The Petes got one back, a little less than seven minutes later, with Emmett Sproule notching his 12th, but the 67’s held a 2-1 lead, and a 20-15 advantage in the shots on goal totals, heading into the third.

Though Peterborough would press for the tying marker, Ottawa’s second powerplay goal of the night restored their two-goal lead. Cam Tolnai snapped the puck to Jack Matier at the point, and his shot was deflected home by Rohrer. Fresh off of a star performance at the IIHF World Junior Hockey Championship, the Austrian import’s ninth of the campaign made it a 3-1 game.

Brian Zanetti drew the Petes within one at 10:43, scoring his first OHL goal, but with time winding down, Gaidamak buried an empty-netter to secure a 4-2 victory for the Barber Poles.

Up Next: The 67’s are at home again, tomorrow, taking on the Sudbury Wolves at 2:00pm EST.