67’s Doubled Up by Wolves 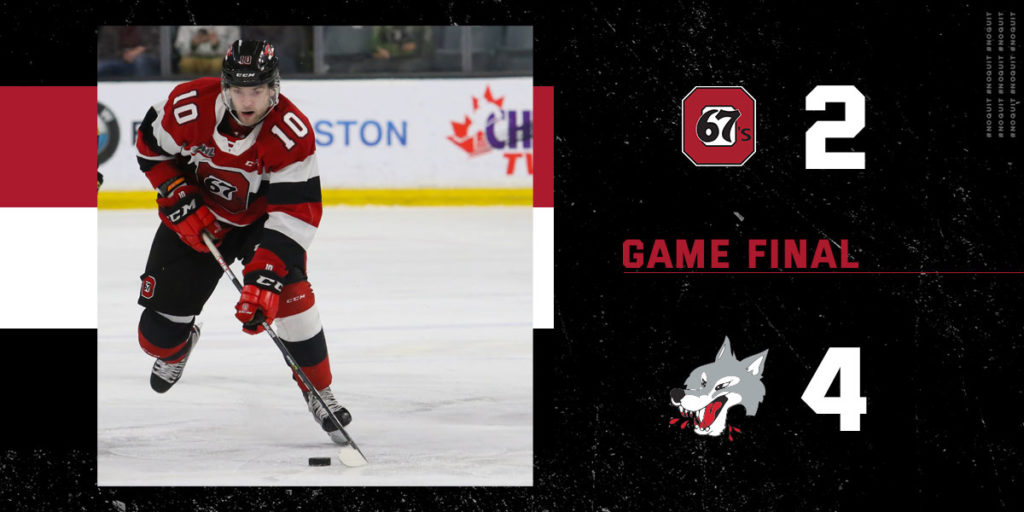 Again playing with a shortened roster — missing Jack Back, Adam Varga, and Thomas Johnston — the Ottawa 67’s couldn’t quite find the equalizer late in the third, falling 4-2 to the Sudbury Wolves.

Ottawa opened the scoring early in the first, when a point shot by rookie defenceman Derek Smyth beat Mitchell Weeks for his first OHL goal, and 1-0 lead. The Wolves responded with a goal by Quentin Musty in the period’s final five minutes, sending the two teams to the second tied at 1-1.

Sudbury tallied two more in the second, with Evan Konyen getting on the board, and another goal by Musty giving the Wolves a 3-1 lead going into the third.

Cam Tolnai drew the Barber Poles within one, just past the midway point of the third, after a terrific rush by Brenden Sirizzotti created a rebound, and Ottawa’s leading scorer made no mistake to cut the lead to one.

The Wolves would put the game out of reach, however, with a goal by Kocha Delic at the 16:45 mark.

Up Next: The 67’s are back on home ice, Sunday, taking on the Peterborough Petes at 2:00pm EST.

67’s Edged by Generals in Overtime
1 day ago