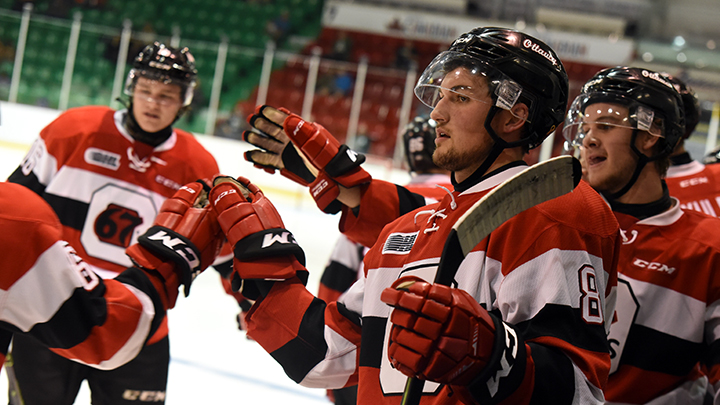 GATINEAU – The Ottawa 67’s went over a bridge to get under the skin of the Gatineau Olympiques on Friday night.

With the 2016-17 OHL regular season fast approaching, the 67’s hopped across the river for the first game of a preseason home-and-home against the QMJHL’s Olympiques and left a few hours later with a 3-2 win.

Drake Rymsha and Travis Barron also scored to clinch Ottawa its first win of the preseason.

After staking the home team a 1-0 lead in the first period, 67’s goalie Olivier Lafreniere, expected to back-up starter Leo Lazarev in the Ottawa goal this year, shut the door the rest of the way and wasn’t beaten again until late in the game with Ottawa down a man. Rymsha, who seemed to get the biggest rise out of Gatineau players throughout the game, tied things up in the second to set up a tight third period.

Penalties proved to be Gatineau’s undoing in the final frame as the Olympiques found themselves on the wrong end of a five-on-three powerplay in the third, the second time in the game Gatineau went down two men as they tried unsuccessfully to get Ottawa involved in the extra-curriculars.

Barron gave Ottawa the lead in the third on what looked to be a broken play ended with the puck on the stick of the third-year forward, with Barron spinning around and sliding the puck between the Gatineau goalie’s pads for the go-ahead marker.

Gatineau tied the game with under three minutes to play as sustained pressure in the Ottawa zone eventually saw the Olympiques break through on a late power play.

The 67’s return to action Sunday afternoon when they close out the preseason series with Gatineau at TD Place at 2 p.m.

Tickets for Ottawa’s preseason games are priced perfectly for families, with adult tickets at $10 and kids tickets for only $5. Score your seats for Sunday’s game by clicking here, calling 613-232-6767 x1, or in person at the box office at TD Place.