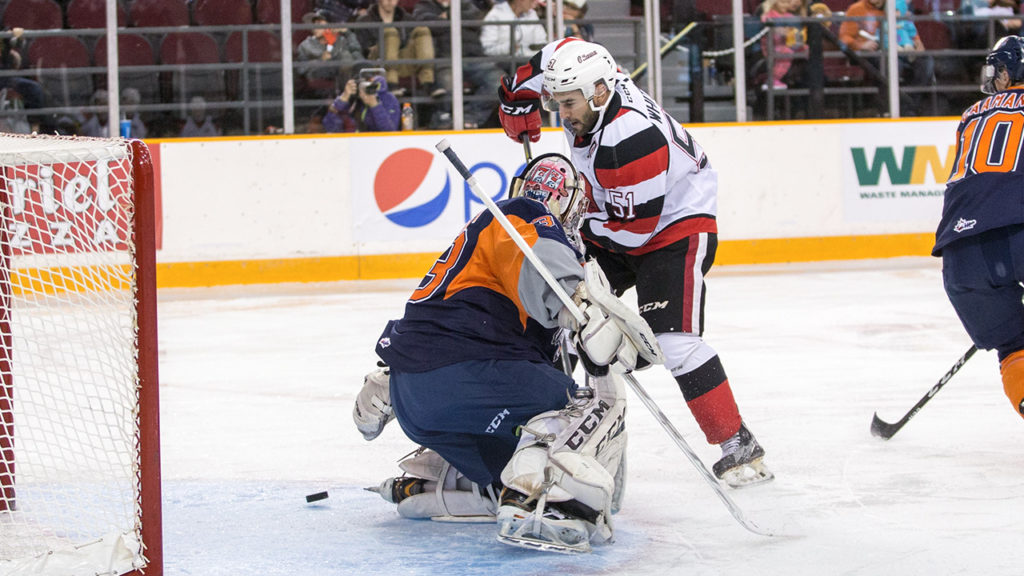 Fan’s were treated to some Halloween fun and to a high-scoring game Sunday afternoon at The Arena at TD Place, but the trick came from the Flint Firebirds who mounted a late comeback thanks to a five-point afternoon from Luke Kirwin to hand the Ottawa 67’s an 8-6 loss.

The game set a season-high for combined goals this year in a 67’s game with 14, eclipsing the mark set on October 20 in North Bay.

“When you score six goals at home, you should be able to hold a lead,” said associate coach Mike Eastwood in his post-game media conference. “Our attention to detail in the defensive zone wasn’t where it needs to be.”

Eastwood calls the game a “tough lesson,” but hopes a week of practice would help the 67’s shake off the loss.

One player from each of the two teams had a multi-goal performance in the first period. Sasha Chmelevski and Kirwin both scored two, with Ottawa ending the frame up 3-2.

Noel Hoefenmayer had the other 67’s goal in the period, after captain Travis Barron fired a perfect pass across to the offensive defenceman on a three-on-one.

Both teams would combine for five goals once again in the second.

The Firebirds struck first. Just before the five-minute mark, Cullen Mercer dug the puck out of a corner battle and stuffed the puck through the pads of Ottawa starter Olivier Lafrenière for a 3-3 tie.

The 67’s would answer right back moments later. New acquisition Jared Steege sent a spinning backhander off the pad of Flint goaltender Garrett Forrest, and Patrick White put home the rebound from the right side.

Then it was Ryan Moore two minutes later for Flint, tying the game at four. They would continue to trade barbs, leaving the score at 5-5 through two periods after.

White had both 67’s goals in the frame. It was the highest goal total through two periods all season for Ottawa.

With the score at 6-6 late in the third, it was Flint that capitalized. Mathieu Henderson got on the board, scoring with 3:14 remaining to pull the Firebirds ahead.

Kirwin added his fourth goal of the game in the final minute, icing the affair with an empty netter to make the final 8-6. He also had an assist on Henderson’s game-winner.

Ottawa will now take a five-day break, before hitting the ice on November 4 in Kingston against the Frontenacs.

The team will then return home the next day (November 5) to host the Guelph Storm at 2 p.m.