67’s Edged by Generals in Overtime 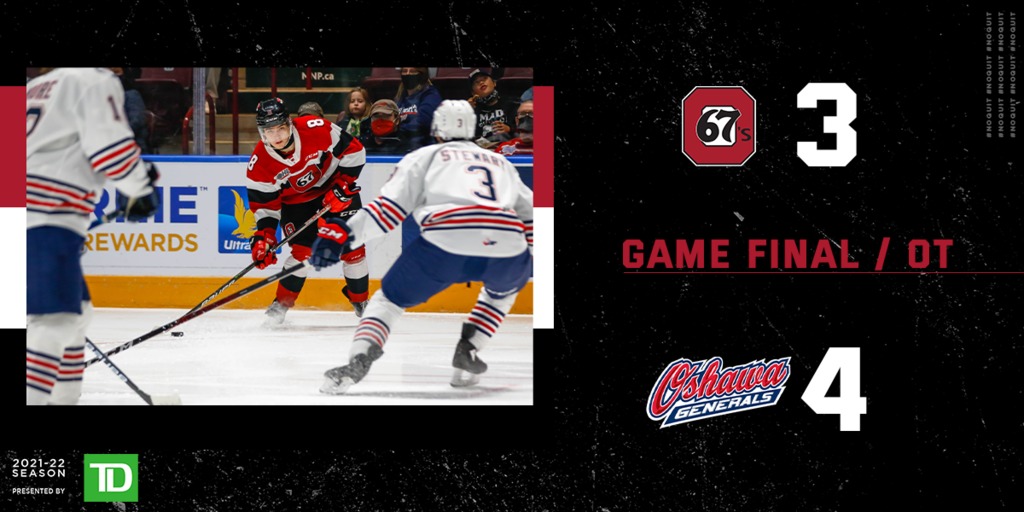 In a game where the Ottawa 67’s deserved a better fate, they fell 4-3 to the Oshawa Generals in overtime.

Vinzenz Rohrer, Matthew Mayich, and Anthony Costantini all scored in the first period, but Oshawa tied it late, before a Brett Harrison game winner left the Barber Poles with a point on the road.

The Generals roared out to an early lead, with two quick goals from Harrison and Andrew Whitton to open the game. The 67’s quickly mounted a response, however, kickstarted by a Rohrer powerplay goal. Brenden Sirizzotti fed the Austrian import a centring pass, and Rohrer banged the loose puck past Patrick Leaver to get Ottawa on the board.

Just 21 seconds later, Adam Varga — returning to the lineup after a three-game absence — dashed into the Generals zone, and threw a quick shot on net. Mayich charged the net for the rebound, and his second of the year tied this one at 2-2.

Not done there, the 67’s took the lead a little over three minutes after the Mayich marker. Jack Dever, in his first OHL game, got the puck to Steve Laforme, who fed Costantini at the top of the circle, and the defender rifled a bullet of a shot to the back of the goal, making it 3-2 Barber Poles.

Despite outshooting the Generals 19-6 in the second period, Ottawa just couldn’t break through, and a Ryan Gagnier goal 2:13 into the third tied it at 3-3.

The 67’s peppered the Oshawa goal for the remainder of the night, but couldn’t find the go-ahead marker, and Harrison potted the game winner 36 seconds into overtime to earn the win for his Generals.

Up Next: The 67’s are back on home ice for a brief spell, Saturday, in a 2pm EST showdown with the North Bay Battalion.