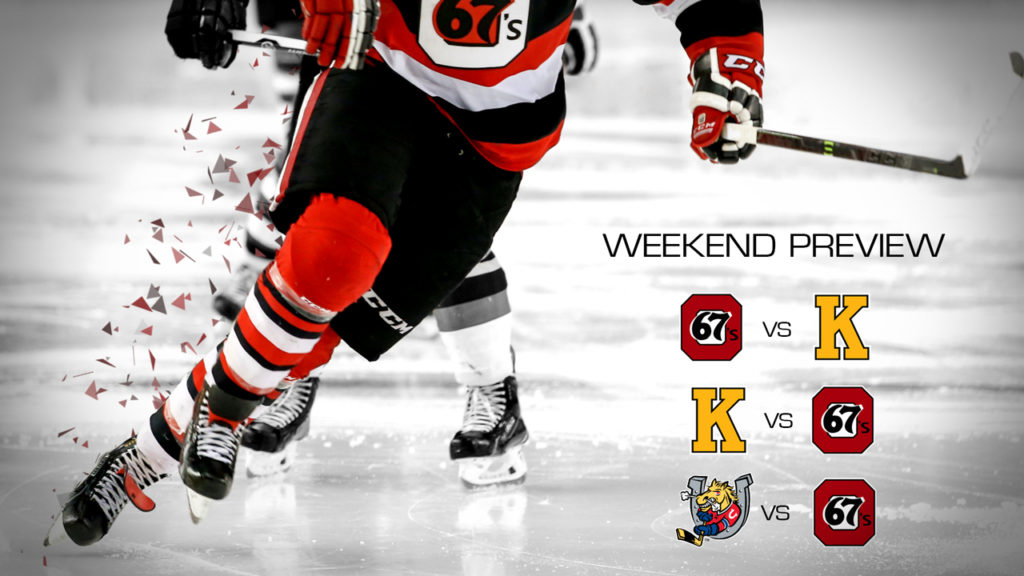 Sitting in seventh place in the Eastern Conference, the 67’s enter their last grueling weekend of the regular season, with their second consecutive stretch of three games in three nights. Ottawa will start things off Friday evening in Kingston, before coming back home Saturday to host the Frontenacs and wrap things up Sunday afternoon against the Colts.

After picking up four points out of six last weekend, the Barber Poles will be looking to build on their recent success and try to catch the Sudbury Wolves, currently occupying sixth spot in the East, three points ahead of the 67’s.

Two 67’s players will be looking to extend their points streaks, as Austen Keating has picked up 12 points in his last seven games (4G,8A), while Sasha Chmelevski registered six points (2G,4A) in his last two games.

Keating believes that his team’s recent success is due to sticking to the game plan.

“We have to come out and play 60 full minutes of hard Ottawa 67’s hockey,” said Keating. “We’re heading into this weekend very confident looking for wins. Lately we’ve been very focused, serious and not fooling around. At home, the crowd is very loud and lively and we have to feed off their energy.”

According to 67’s Head Coach Jeff Brown, the plan at this time of the year isn’t very complicated.

The Barber Poles kick off the weekend with a home-and-home series, Friday and Saturday, against the Kingston Frontenacs, whom they’ve defeated in their last two meetings, most recently 5-4 in a 14-round shootout on January 25.

The 67’s will then close out their busy weekend by hosting the Barrie Colts, who are currently sitting in last place in the East, having lost their last four games and won only two of their last 10 games.

Following this weekend, the 67’s will be on the road on March 9 and 10 in Peterborough and Oshawa, before coming back home to wrap up the regular season with a three-game home stand beginning on March 15 against Peterborough.