67’s face Saginaw for second time in a week 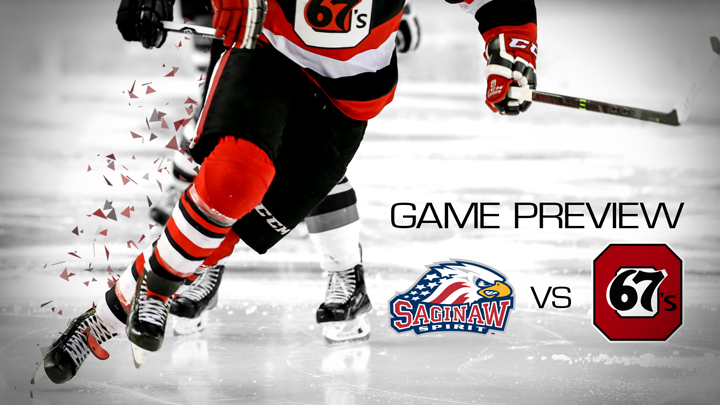 After suffering a heart breaking 2-1 loss Thursday night to Kingston on a goal in the final minute of play, the 67’s look to rebound against the Saginaw Spirit Saturday afternoon at The Arena at TD Place – the second time in a week that they’ve faced the Spirit handing them a 6-3 loss last weekend in Michigan.

“It’s a great opportunity for us to bounce back right away,” said head coach and GM Jeff Brown. “We need to compete better and drive the net way more than we did against Kingston cause that’s where the goals are scored. It’s another opportunity for our young team to show character, work hard and hopefully get the win.”

Despite a record of 0-4-0-1 through their opening five games and just 8 goals scored, Brown is expecting to face a hungry and tough Saginaw team on Saturday afternoon.

“They’re a good team, even though their record isn’t great so far,” commented Brown. “They’ve just got five guys back from NHL camps and they have some very good players so our team better be ready, because I’m expecting a tough challenge.”

20-year-old forward Patrick White had a solid game last weekend against Saginaw, picking up two assists and earning the second star of the game. White believes his team needs to keep things simple against Saginaw to reproduce the same kind of performance.

“Our offence did very well in that game mainly because we skated well and worked hard,” said White. “Hopefully Saturday we will bring the same energy to the table and keep things simple. If we do so I’m confident we can get a good result.”

Despite only scoring one goal in their last game, the 67’s still have the second best offence in the OHL with 25 goals scored after six games. Austen Keating is third on the OHL scoring list, with 11 points, while Artur Tyanulin comes in fourth place with 10 points.