67’s Fall to Frontenacs on the Road 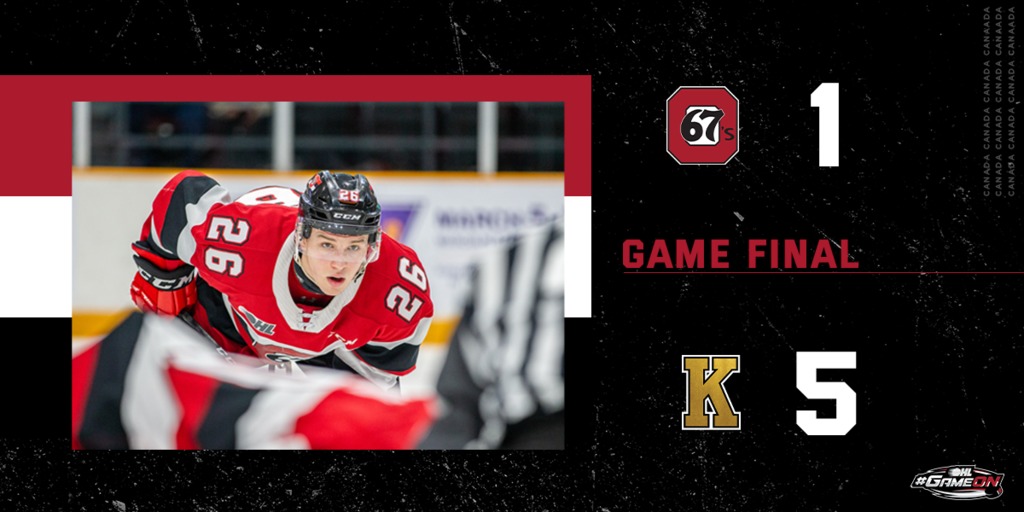 In their second preseason game of 2021, the Ottawa 67’s dropped a 5-1 decision to the Kingston Frontenacs.

The Fronts were powered by goals from Paul Ludwinski, Chris Thibodeau, Mitchell Brooks, and Lucas Edmonds, with netminder Mason Vaccari turning aside 22 of 23 Ottawa shots. The 67’s broke his shutout bid with a late goal by 2020 Import Selection Vsevolod Gaidamak.

Kingston opened the scoring 7:41 into the contest, when Ludwinski deflected a Lucas Peric point shot past Collin MacKenzie, giving his team a 1-0 lead. Even still, the 67’s kept pace for the remainder of the frame, logging some chances of their own, and heading into the second period with the shots on goal totals even at 7-7.

Despite outshooting the Frontenacs 10-6 in the second frame, it was here that the game would slip away from Ottawa. Thibodeau banged home a Chase Constantino rebound 3:42 in, and a one-timer with the man advantage would see Edmonds make it a 3-0 game, just over two minutes later. Brooks found the back of the net at 13:06, and the Barber Poles went into the third down by a score of 4-0.

The 67’s finally broke through on the powerplay, near the midway point of the third. Matthew Mayich fed Luca Pinelli, who cut to the front of the net, and made a beautiful cross-crease pass to Gaidamak, and the Russian import made no mistake to get Ottawa on the board.

Edmonds, however, added another powerplay marker not long after, restoring the Fronts’ four-goal lead at 5-1. That would be all from the Leon’s Centre, as Kingston skated off with the win.

Up Next: The Barber Poles make their return to The Arena at TD Place on Friday, September 24, for a 7:00pm EDT faceoff with the North Bay Battalion.