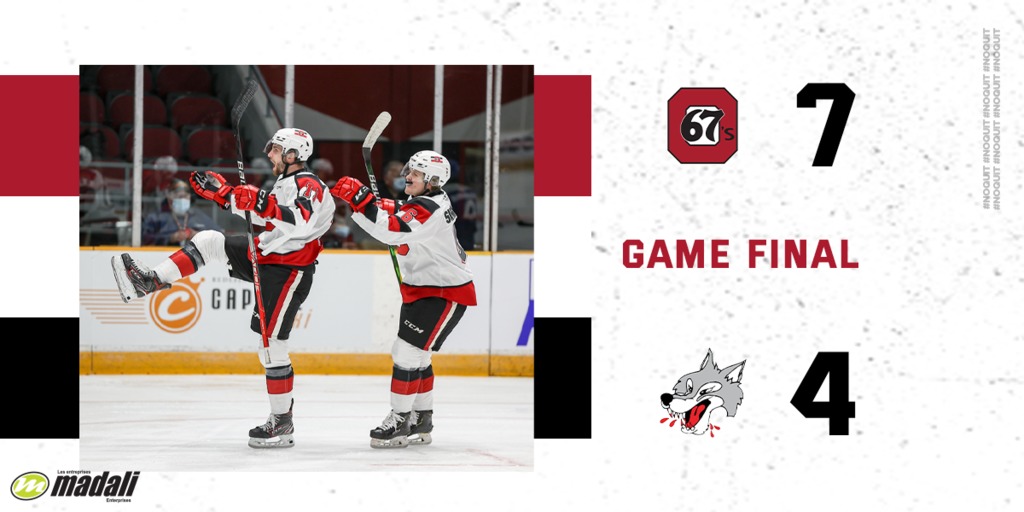 The Ottawa 67’s wrapped up their four-game homestand in style, earning a 7-4 win over the Sudbury Wolves.

Thomas Johnston led the way with two goals, while Jack Back and Cam Tolnai each logged three point nights. Goals were plentiful, also coming by way of Adam Varga, and Vinzenz Rohrer, as the Barber Poles peppered Wolves goaltender Mitchell Weeks with 52 shots.

Ottawa netminder Collin MacKenzie made 21 saves, including a few worthy of the highlight reel, for his second OHL win in as many tries.

It was a solid response for the Barber Poles, coming off of a 4-1 defeat to the Oshawa Generals on Friday night.

“Friday night, we came on hard in the first period and then we just didn’t play our game the rest of the two periods. We weren’t physical, we weren’t competing, we just weren’t playing 67’s hockey,” said Johnston, “[Head coach Dave Cameron] said we’re gonna play that first period hockey the whole way through. Ride the ups and downs, but we’re not going to give up on ourselves, and we did that today, and we got the result we wanted from it.”

In what has become something of a trademark of the team this season, the 67’s got off to another tremendous start. Just 3:40 in, Vsevolod Gaidamak threw the puck to the net, and a furious attack by Brady Stonehouse was able to knock it loose in the Sudbury crease, where Varga chipped it home for his first of the year, and a 1-0 Ottawa lead.

Speaking of staying hot, the Barber Poles extended their powerplay scoring streak to five games just under 10 minutes later. A textbook tic-tac-toe passing play saw Tolnai make a cross-ice feed to Beck, who fed Rohrer at the goalmouth, and the Austrian import deflected his second of the year past Weeks.

The Wolves responded late in the frame, with Payton Robinson’s first OHL goal on an odd-man rush, but Johnston answered with an incredible goal. He weaved across the ice, dangling through the Wolves defenders, before burying his own rebound to send Ottawa to the second period with a 3-1 lead.

It didn’t take long for Johnston to be heard from again. 1:09 into the frame, Tolnai fed him in the slot, and Johnston slid his second of the game through Weeks’ five-hole, extending the Barber Poles’ lead to 4-1.

Sudbury answered again on a powerplay of their own. Chase Stillman picked up the puck in his defensive zone, and skated all the way down the boards, cutting into the 67’s lead with a quick shot from a tough angle. They’d continue to threaten early in the third period, as well, when Evan Konyen beat MacKenzie on an odd-man rush to make it a 4-3 game.

The 67’s would put their collective foot to the pedal, on that note. Beck took advantage of a Wolves turnover with 12:44 remaining, beating Weeks all alone in front of the goal to regain the two-goal lead. Tolnai’s first of the year came 2:10 later, finishing off a breakaway chance with a top-shelf goal, bumping the 67’s lead to 6-3.

Stillman got one back with just under three minutes to play, on a play that appeared to be offside, but a video review upheld the Sudbury marker. Beck, however, responded with his own second of the night on an empty-net, giving the Barber Poles a 7-4 win.

“I thought our quality of shots was good, and we got rewarded because we had guys at the net. Guys who make the goalie’s job tough,” said Coach Cameron, “We grabbed up some rebounds. We had that that presence.”

Up Next: The 67’s kick off a four-game road trip Friday, October 22, taking on the Mississauga Steelheads at 7:00pm EDT.