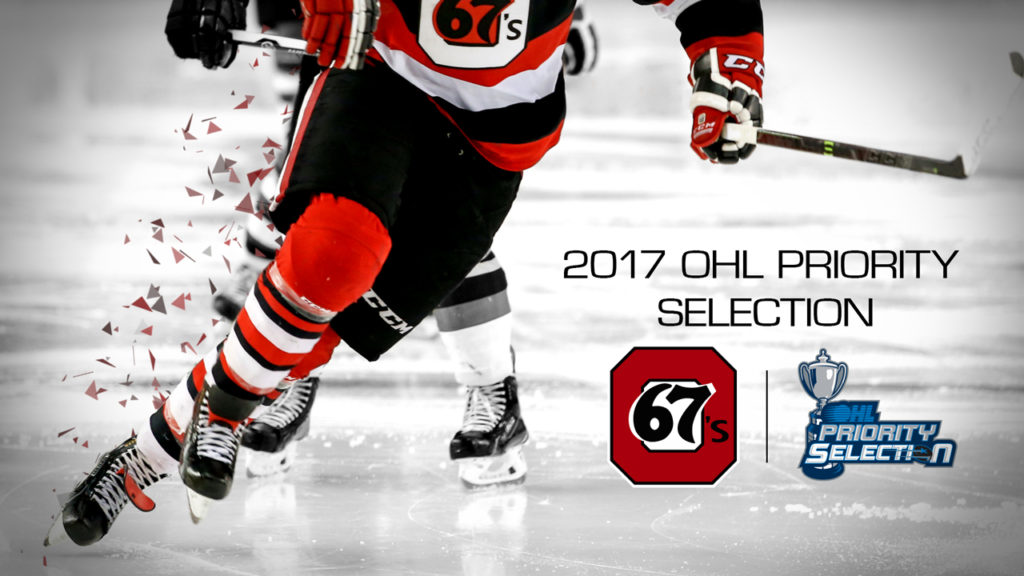 After a successful draft in 2016, the Ottawa 67’s will again take steps on building their future pool of prospects this Saturday at the 2017 OHL Priority Selection Draft. With the sixth overall selection, the 67’s will look to add a high-end talent to their roster to join the likes of Peter Stratis, Carter Robertson and Kevin Bahl who were marquee selections in last year’s draft and were key fixtures in the 67’s line-up this season. Ottawa has 13 draft picks, including two in the third round. The draft will begin at 9:00 a.m. with the first three rounds streamed LIVE as part of a Draft Show on the OHL website.

The sixth spot in the draft has produced a number of OHL talents over the past few seasons. Selections include Danil Antropov (OSH), Logan Brown (WSR), Robby Fabbri (GUE), Matt Puempul (PBO) and Ottawa’s pick in 2007 Michael Latta.

In addition to Stratis, Robertson and Bahl, the 67’s saw six of their 2016 draft selections earn ice-time this past season with Mitchell Hoelscher, Quinn Yule and Sam Bitten all proving that they have what it takes to play in the OHL.

67’s fans can tune into the LIVE draft show streamed on the OHL website beginning at 9:00 a.m. The 67’s will also be live tweeting the selections made by the team. Follow along on Twitter @Ottawa67sHockey.

Season Tickets are on sale now for the 2017/18 season. Come out and watch this young and exciting Ottawa 67’s team. Click here for more information.

More News
A Note From GM James Boyd
22 hours ago