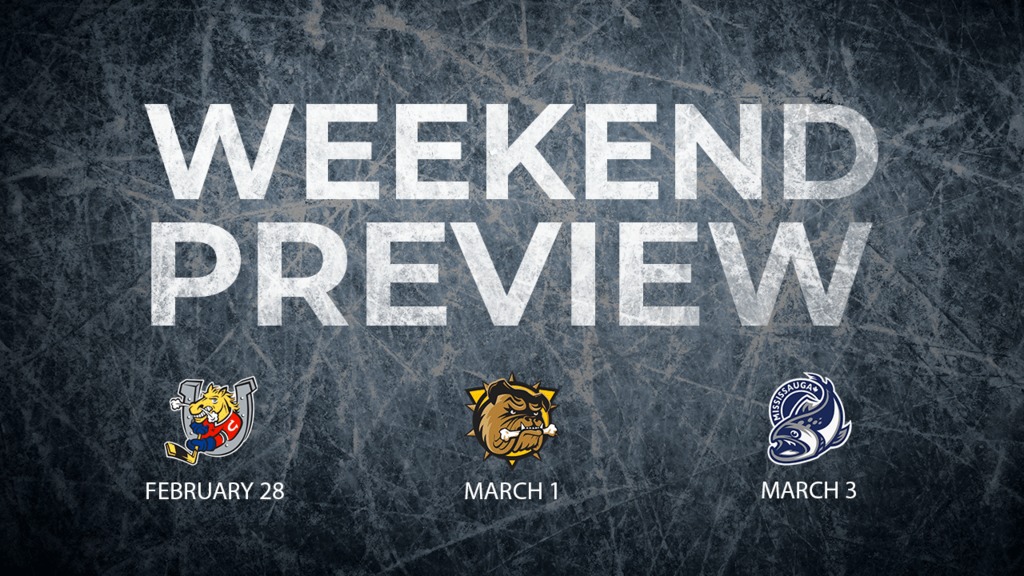 After seeing their five game winning streak, as well as their 15-game undefeated in regulation streak come to an end on Friday, when they were defeated 3-2 by the Kingston Frontenacs, the Ottawa 67’s will look to bounce back in a big way, as the team has three games on the schedule for this week.  The Barber Poles will be in Barrie on Thursday to face off against the Colts, before heading to Hamilton the next day to take on the Bulldogs.  This busy week of hockey will bring Ottawa back home on Sunday as the Mississauga Steelheads will be at The Arena at TD Place for the final meeting of the regular season between these two sides.

Even though the Barber Poles’ streak came to an end last week, the team remains atop of the OHL standings with a total of 93 points, four ahead of the second place London Knights.  With eight wins in their last ten games, Ottawa will be looking to keep things rolling in a positive direction while they get in a groove ahead of the playoffs, which will be starting in less than a month.

The 67’s star studded lineup has been led by forward Tye Felhaber all year.  The Pembroke native is now at 55 goals this season, which is good enough for the league-lead, while his linemate Austen Keating is tied for second in the leagues’ assist column with 57.  Completing the trio is rookie Marco Rossi, who is the OHL’s second-best scoring rookie.  Rossi has put up 57 in 44 games, while the only player ahead of him has 62 points in 54 games, ten more than the Austrian rookie.

When it comes to the goaltending position, the Barber Poles count on a two-headed monster made up of Mikey DiPietro and Cedrick Andree.  It has not been determined who will be in net for which game over the course of this week, but one thing is for sure, is that Ottawa is in a good place when it comes to goaltending.  Both goalies’ numbers have been great this season, with both being either in the OHL’s top five or top ten in almost if not all goaltending statistics.

Ottawa will close out their month of February in Barrie, before kicking off the month of March Friday in Hamilton.  With the playoffs set to kick off near the end of March, this final month of the regular season is shaping up to be an interesting one.

Mathematically speaking, the Colts are still in the playoff hunt for the eighth and final available spot in the Eastern Conference.  With 52 points in the standings, they are trailing five points away from the Peterborough Petes and the North Bay Battalion, who are both even at 57 points, holding on to the two final playoff spots.  With a five point deficit and no games in hand, this is a must win game for the Barrie Colts if they hope to be part of the postseason dance.  Offensively, the team traded away its’ leading scorer Lucas Chiodo at the trade deadline to the 67’s.  Without 20-year old Chiodo, NHL top prospect Ryan Suzuki has taken the opportunity to lead his team and has ran away with it.  Suzuki leads the team with 60 points in 56 games and is a highly-touted prospect for the upcoming NHL Entry Draft.  Aside from Suzuki, Barrie counts on multiple other talented players like Matej Pekar, who has put up over a point per game and represented his country at the most recent World Junior Hockey Championships.

After five meetings against one another that were all won by the 67’s, these two teams will meet for the sixth and final time of the season.  With all five previous meetings going to the Barber Poles, in which they outscored the Bulldogs by a combined total of 21 goals to 10.  Hamilton has however hit a little bit of a rough patch recently, losing their last three games and only winning four out of their last ten.  Sixth place in the Eastern Conference, with two games less to play than the teams that are trailing them in the standings, they need points in order to clinch their playoff berth.  Offensively, the Bulldogs count on NHL top prospect for the upcoming draft Arthur Kaliyev, who has put up and impressive 93 points this season, and Philadelphia Flyers prospect Matthew Strome, who has 74 points.  The defensive side of the game has not been Hamilton’s strongest point this season, as only three OHL teams have allowed more goals than them this season.  Heading into this important stretch, every game is a crucial one for the Hamilton Bulldogs.

Fifth-place in the Eastern Conference, the Steelheads have won six out of their last ten games, but are currently on a two-game losing streak.  Most likely the next Eastern Conference team to clinch their playoff berth, Mississauga is another team that is playing only must-win games from here on out.  Acquired at the beginning of the season, Alan Lyszczarczyk has been great for the Steelheads.  The overage American forward leads the team in points with 71 points in 55 games this season.  Mississauga has lost two games to Ottawa this season: a 4-3 loss in September and a 3-1 loss in October.  However, the Steelheads were the ones that broke the 67’s 9-game winning streak back in early February in a 2-1 contest that was decided in a shootout.