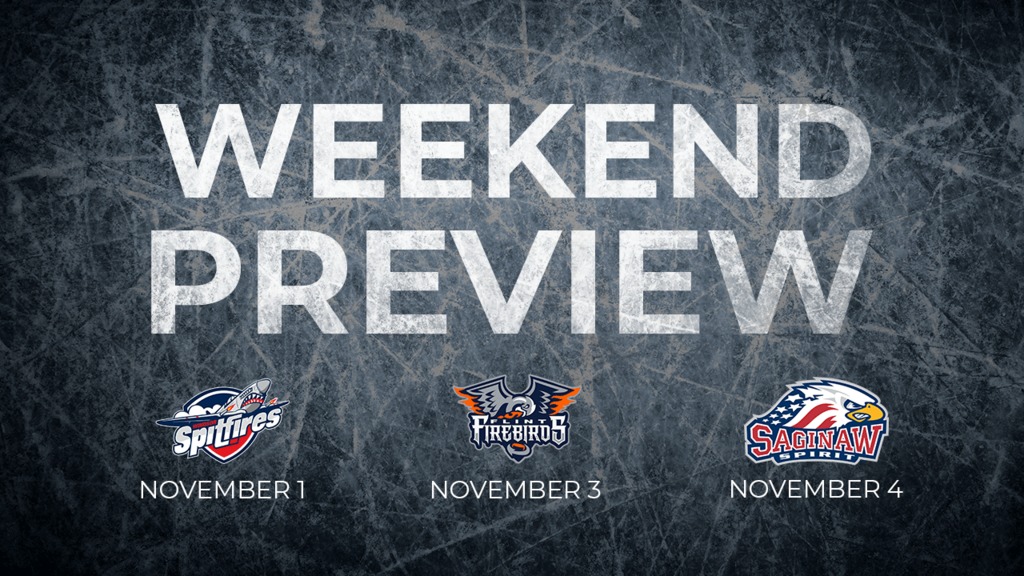 Coming off a pair of home wins, the red-hot Ottawa 67’s will look to continue the streak on the road with a trio of games away from TD Place, starting Thursday in Windsor.

After playing the Spitfires, the 67’s head south of the border to visit the Flint Firebirds on Saturday and Saginaw Spirit on Sunday afternoon.

Winners of nine of their last 10 games, the 67’s continue to pad their lead atop the OHL standings, where they sit with 25 points on the back of a 12-3-1 record.  They have a seven-point lead over second-place Peterborough.

Through 16 games, 67’s forward Tye Felhaber is tied for the league lead in goals with 16, while Austen Keating leads the OHL in assists with 21.  Their linemate, dynamic Austrian rookie Marco Rossi, leads all rookies with 18 points.

4th in the West Division, Windsor has a young roster to work with this season.  With just 45 goals scored so far this season, only three teams in the OHL have scored fewer goals than Windsor.  Luckily for them, they can count on one of the best goalies in the league in Michael DiPietro.  Leading the Spits in points are two rookies in Jean-Luc Foudy and Will Cuylle, who was traded for seven draft picks back in August.  Both respectively have 12 and 10 points in 15 games this season.  As for DiPietro, the veteran has a goals against average of 2.58 and a save percentage of .914, along with four wins and a shutout.  Windsor has only won three games of their last ten, but did come out victorious in their last game, which took place in Owen Sound, where they beat the Attack 6-1.  Ottawa has played once against Windsor so far this year, a game where the 67’s came out victorious at home by a score of 4-1. Rossi put on a show with two goals and an assist in that one.

Still looking for their first win this season, it seems like nothing has gone right for the Firebirds in this early start to the year.  On a current 14-game losing streak to start the season, it is hard not to overlook Flint, but as all OHL fans know, anything can happen over the course of one game.  Led by Dallas Stars 2018 first round pick Ty Dellandrea, who has put up 12 points in 14 games, Flint counts on many other talented players such as giant defenseman Fedor Gordeev and the 10th overall pick in the 2017 OHL Priority Selection, Ethan Keppen.  Defensively, a lot of work has to be done by Flint, since they have the worst record in the OHL for goals against, with 82 in 14 games, which is an average of almost 6 goals against a game.

One of the stronger teams on paper before the start of the season, Saginaw is just now starting to find their groove with six wins in their last 10 games.  The Spirit counts on six players who are drafted by NHL teams on their roster, part of the reason many saw them amongst the OHL’s elite before the season started.  Twenty-year-old forward Albert Michnac has been leading the charge offensively for Saginaw with 21 points in 14 games.  Rookie Cole Perfetti has also been impressive for the Spirit, with eight goals so far this season.  In goal, Saginaw has not seen a goaltender take the reins on the starter job, while Ivan Prosvetov and Cameron Lamour both vying for the role, with rookie Tristan Lennox also seeing action in two games.
Game Notes