67’s hit the road for mid-week matchup in Kingston 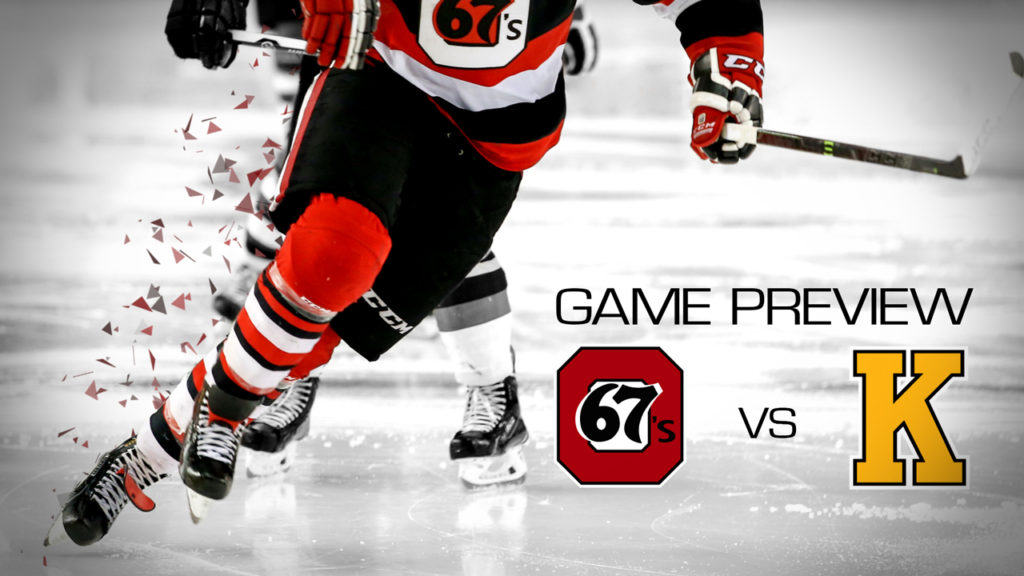 After picking up two points and splitting their two games at home against Windsor (4-2 loss) and Sarnia (5-3 win) last weekend, the 67’s are ready for another busy week, starting Wednesday evening with a stop in Kingston to face the Frontenacs.

With their win against Sarnia, the Barber Poles climbed up to fourth place in the Eastern Conference, proving once again that they are one of the hottest teams in the conference.

With six wins in its last 10 games, Ottawa has the second-best active streak in the East. Only Oshawa has a better active record, with seven wins in its last ten games. The 67’s are also on fire offensively as they scored 24 goals in their last six games.

Sasha Chmelevski has had a hot stick lately, as the centerman found the back of the net in each of his last three games, proving to be a key offensive asset for his team.

“It’s been good lately,” said Chmelevski. “I’ve been going to the net more and my teammates do a good job finding me. I’ve been working on getting into those scoring areas and taking advantage of my opportunities and hopefully I can keep going.”

The 67’s will be facing a struggling team tonight, as the Frontenacs picked up only one win in their last four games – in overtime – and were outscored 15-10 during that stretch. Regardless of Kingston’s recent record, assistant coach Mike Eastwood expects a hard-fought battle.

“They are a hard-working team and are well-coached,” said Eastwood. “Paul McFarland does a great job there and he will get the most out of his guys for that game. Every time we play those guys it’s close, it’s tight and I don’t expect Wednesday’s game to be any different.”

Wednesday’s game will already mark the fourth meeting of the season between Kingston and Ottawa. So far, the Barber Poles have the upper hand with two wins in three games. Fans can expect another tight affair as all three contests between the two teams this season were decided by one goal.

Following Wednesday’s game, the 67’s will come back to Ottawa for a pair of home games this weekend, as they will face Kitchener on Saturday afternoon and Mississauga on Sunday afternoon.